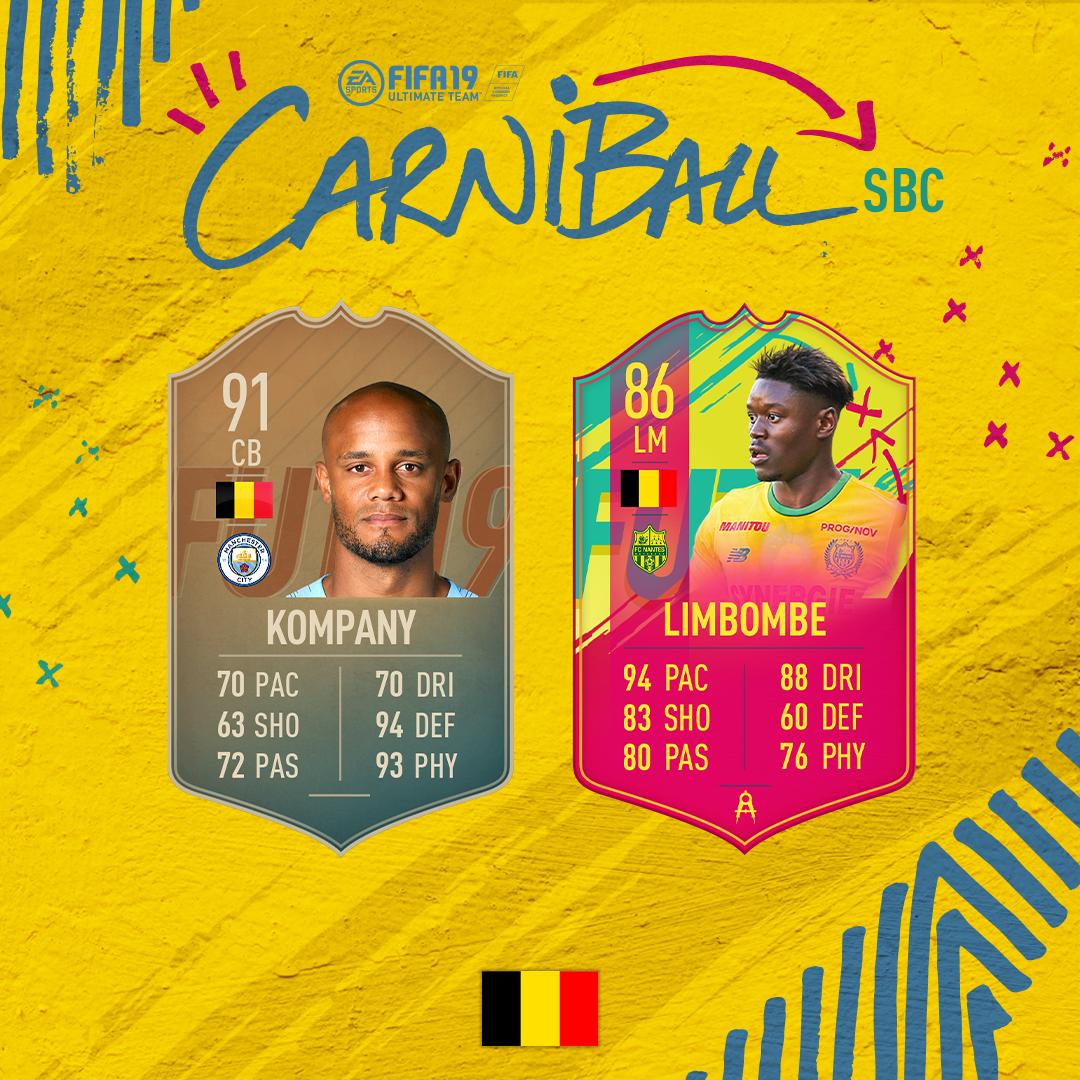 Sunday, March 10 was the day for Belgium to take center stage for the new Carniball promotion. Here’s everything you need to know about how to complete the Carniball Limbombe and Flashback Kompany SBCs in FIFA 19.

The first FIFA 19 SBC you’re likely to complete, since it is cheaper, it the Carniball Limbombe SBC. Coming in at around 90k coins, it’s reasonably priced. Here are the requirements:

Due to the recent crash in the FIFA 19 transfer market, 83 and 84-rated players are extremely cheap, which makes the Carniball Limbombe SBC super easy to complete. The only tricky components will be the 90 chemistry requirement in the second squad and the need for in-forms.

For both Carniball Limbombe SBC segments, it’s best to just stick to one of the major leagues and build a full squad. 84 rated players in FIFA 19 are between two and four thousand coins, and 83s can be bought for as little as 800 coins.

Belgium players you could use are Vincent Kompany or Axel Witsel, or even Yannick Carrasco is you’re okay for chemistry. Then, you can just slip in the in-forms you need, sticking to the current TOTW, since they’ll remain cheap by being actively packed.

If you stick with one league, especially for the 83-rated squad, you should have no problem using a TOTW player from any league or nation in FIFA 19.

This Flashback Kompany SBC in FIFA 19 is not even close to the quality of the End of an Era Kompany from last year’s game. While his defending stats are similar, he’s far slower, and even more expensive.

While the team ratings required make both parts of the Flashback Kompany SBC more expensive, the low chemistry requirements mean you have a lot more freedom. You won’t need to just stick with one league, nor will you need to have every player in their correct position.

Just as is the case for the Carniball Limbombe SBC, Vincent Kompany and Axel Witsel will be good choices for the Belgian player you need, then you can use TOTW players from the current FIFA 19 squad. Even the likes of Sigurdsson and Mkhitarian are quite cheap and high rated.

Gundogan, Laporte, and Ederson are also good choices for the Manchester City player you need in the first section of the Flashback Kompany SBC.

That’s everything you need to know about how to complete the Carniball Limbombe and Flashback Kompany SBCs in FIFA 19. For more tips and tricks on the game, be sure to search for Twinfinite or check out our FIFA 19 guide wiki.