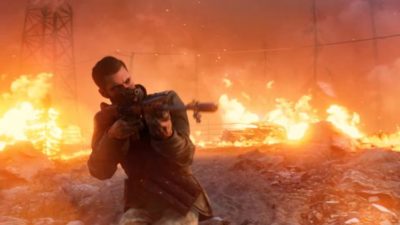 How to Get a V1 Rocket in Battlefield V Firestorm

While you can find a whole host of standard Battlefield weapons, each kitted out with different attachments, as you explore Firestorm’s map, there are other powerful items you can get elsewhere. Here’s everything you need to know about how to get a V1 Rocket in Firestorm.

What It Does in Firestorm

The V1 Rocket is arguably the most powerful item in Battlefield V’s battle royale mode. It’s an reinforcement item that you can call in that sends a huge rocket flying in from the sky to take out anyone in a certain area. It’s insanely powerful.

That being said, it’s not easy to get your hands on at all. Since it is a reinforcement, it’s not simply found lying around the Firestorm map, in crates, or in safes.

How to Get a V1 Rocket

Instead, you get a V1 Rocket by chance after securing a capture point. Once a the capture point locations have popped up on the map, hightail it to the nearest one and begin capturing it if there’s no one else around.

It works in Firestorm just as capturing points does in modes like Conquest – all you have to do is stand in a specific area around the point. However, it takes a long time to capture a point, and since it’s a place that offers a chance of great loot such as the V1 Rocket, you’re likely to be attacked while you’re trying to do so.

In our time with Firestorm, though, we’ve seen them called in a fair few times, so they don’t seem to be extremely rare, even with how powerful they are.

If you are lucky enough to get a V1 Rocket reinforcement, you simply need to fire the flare gun like item into the sky to call it in.

That’s everything you need to know about how to get a V1 Rocket in Firestorm. For more tips and tricks on the game, be sure to check out our Firestorm wiki guide.