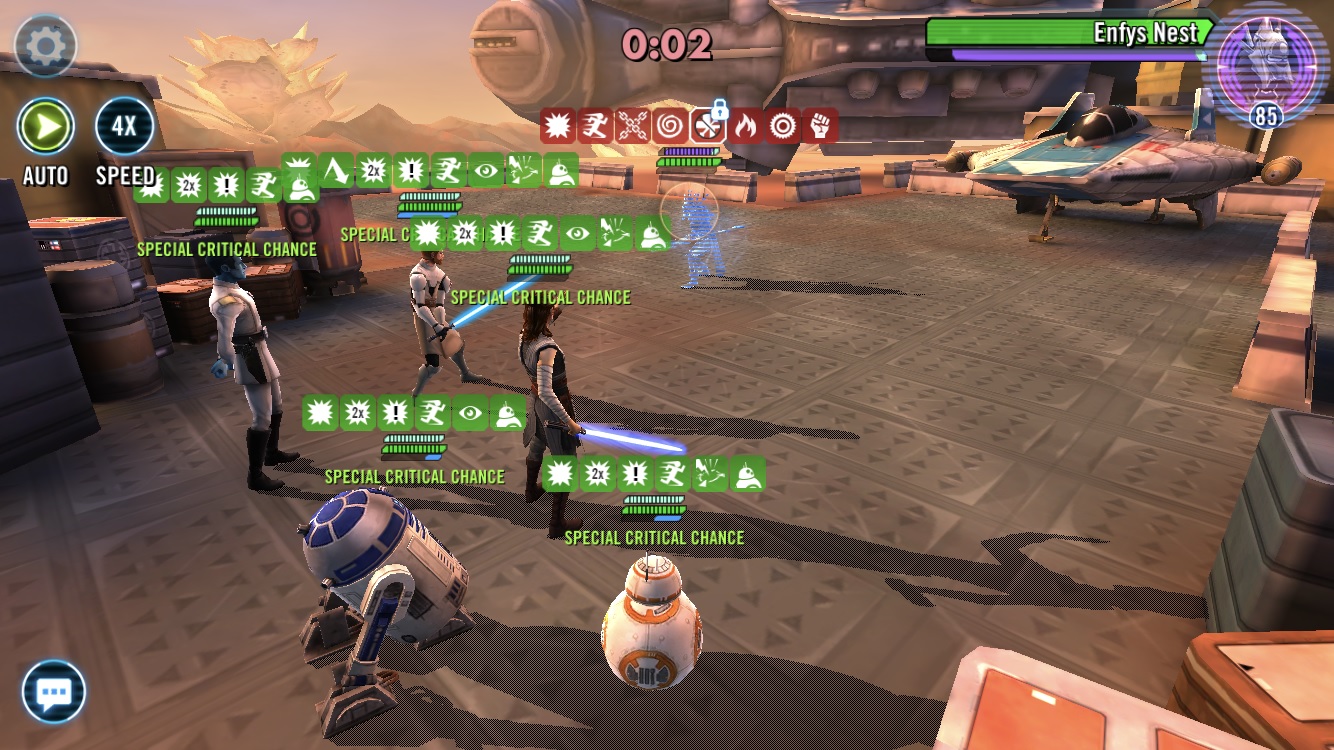 Enfys Nest is known across the galaxy as one of the most dangerous marauders alive, as he leads the Cloud-Riders swoop pirates using vicious and evil tactics. So it is no surprise that he is one of the toughest bosses to defeat when playing Star Wars Galaxy of Heroes‘ Galactic Bounties.

We’ve got the force on our side though, so we know just how to defeat him. Here is everything you need to know about how to beat Enfys Nest in Galactic Bounties 2 in Star Wars Galaxy of Heroes.

In order to beat Enfys Nest, you have to pick the right squad first. While you may be tempted to use the Fetts, Boba and Jango, we recommended avoiding them, as they trigger far too many counters.

Of the characters available to you for this fight in Star Wars Galaxy of Heroes, it’s recommended you pick Greedo, Aurra, Bossk, Dengar, and Cad Bane. Each one plays an important role.

As you can see, a lot of these characters have the stun ability and high DPS. These will come in handy in the final encounter against Enfys Nest in Star Wars Galaxy of Heroes.

Using these characters together will make quick work of the first three encounters, helping you carve a path towards Enfys Nest. Once you reach him, it’ll still be a pretty hard fight especially since you carry over the effects of the first three battles.

In order to do any damage to him, you’ll have to take down his purple shield bar. The easiest way to do this is by using stun and stacking other status effects that’ll slow him down.

Continue doing this, and Nest’s main health bar will deplete. His shield returns pretty quickly though, meaning you’ll have to constantly deplete it before being able to actually damage the main health bar.

Once you get him down to the yellow phase of his health bar, you’ll likely start losing characters. Keep up the same strategy of stacking stuns and other effects with whoever you have left.

In the end, he managed to take down three of my characters, leaving only Aurra and Dengar still standing. Keep in mind that this will probably take a few tries to get down.

For winning the fight, you get sweet loot in the form of XP, crystals, shards, and other useful items.

After defeating Nest, you’re one step closer to cleaning up the galaxy. That is everything you need to know about how to defeat Enfys Nest in Galactic Bounties 2 in Star Wars Galaxy of Heroes.

For more helpful tips and tricks, be sure to check back to Twinfinite daily, as we have plenty of awesome, detailed wikis to explore.