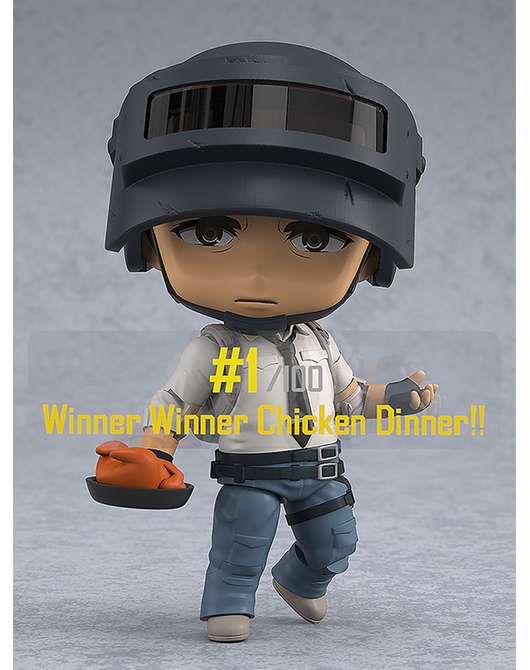 The Good Smile Company and PUBG are teaming up to create the most adorably ferocious version of the game’s mascot yet. The Lone Survivor Nendoroid is available for pre-order now.

The #PUBG Lone Survivor Nendoroid drops in with an AK, an M9 and a pan as optional parts and is fully articulated- including the Level 3 helmet! Crouch and peek and be prone, but never miss the mark with this pre-order!
Learn more: https://t.co/GEUCOfdW7E pic.twitter.com/u5wxGP5eAo

As you can see the PUBG figure will come with several accessories such as an AK, an M9, and even a functioning welders mask that reveals the Lone Survivor’s face. If you are interested in having the figure adorning your desk or game room then it is gonna set you back 5,200 yen. Once you convert that to US currency it comes out to about $50.

This is a pretty standard price for figures in Good Smile’s Nendoroid line. The company is no stranger to video game toys either. They have brought tons of iconic characters to life from brands such as Mario, Metal Gear Solid, Overwatch, and The Legend of Zelda.

For those unfamiliar with Nendoroids, they are the Good Smile Company’s high-end version of chibi style figures. Each one is about 4 inches tall and comes with a wide arrange of accessories, interchangeable expressions, as well as different hands to help achieve several poses. They are highly articulate, meaning that you can create some really cool displays with them.

This is the first time that Nendoroid has added a character from a Battle Royale game to its line up. Hopefully, we will see some characters from Fortnite and Apex legends eventually make their way to Good Smile’s catalog as well.

PUBG was one of the first games to kick off the Battle Royale craze that the gaming industry has experienced as of late. The game is still going strong with cross over events and updates constantly coming down the pipeline.

You can play PUBG now on PC, Xbox One, and mobile devices.