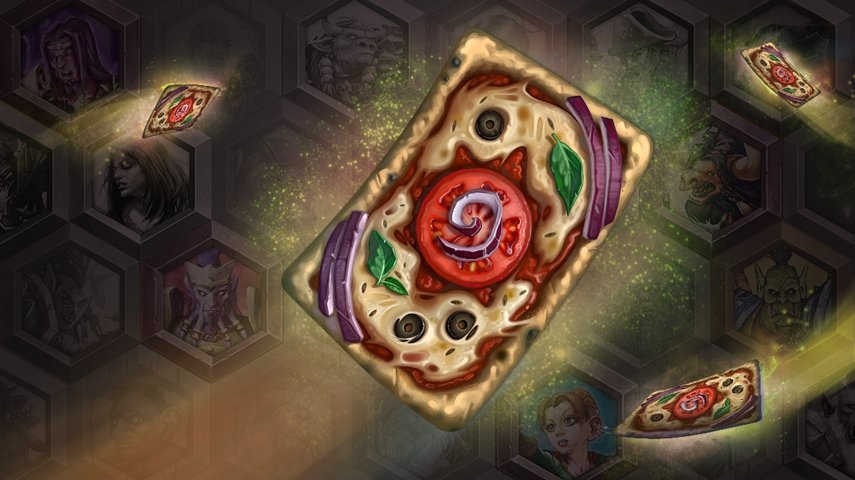 The card back, inspired by the delicious Italian pie, is one of Hearthstone’s many foodie card backs. These have been wildly popular in the past, as we’ve seen with the Cupcake (April 2015), Pie (October 2016), HearthS’mores (July 2017), and Lemonade (August 2018).

Card backs are one of two major cosmetic customizations you can make in Hearthstone; alternate hero portraits are the other. Card backs acquired through Ranked Play are only available once, so don’t miss your chance!

To unlock the card back, all you have to do is win five ranked matches in the month of February. The matches can be Standard or Wild—or a mix of both.

Once unlocked, you can go to your collection from the opening menu, click on the cog icon in the upper-right corner, and scroll through your card backs. Pizza Stone should be your last card back on the list. To begin using it, just right-click on the card back and click the “Make Favorite” button.

Hearthstone has put out many awesome card backs in the past, but this is definitely one that the majority of us can get behind. Who doesn’t like pizza?

February has already been a busy month for Hearthstone. A little over a week ago, it was announced that starting this month, climbing (and falling) in Ranked Play would become easier through fewer Stars being required the lower ranks. Then, just days ago, a balance update was announced that will nerf several popular popular class cards.