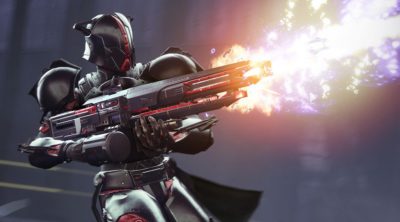 Crimson Days is Bungie’s take on Valentine’s Day in the universe of Destiny and as such, runs from Feb. 12 to Feb. 19. Being themed around Cupid’s favorite day, Lord Shaxx has several bounties that ensure you’ll be teamed up with another player.

Each bounty completed earns you and your partner Confectionary Hearts which can then be traded for prizes; prizes like the The Vow.

What It Does in Destiny 2

The Vow is a bow in Destiny 2 and it’s easily one of the best in the game.

Here are some of its perks:

The Vow in Destiny 2 also comes with a pretty great weapon mod for those interested in customization. Known as Shot Through the Heart, this weapon mod adds some pink and red to the bow.

Equip this mod to showcase your love of Valentine’s Day!

How to Get The Vow

Now that you know about The Vow and all it comes with in Destiny 2 Crimson Days, let’s talk about how to actually get this weapon.

The short answer is that you need to acquire 100 Confectionary Hearts. Once you have 100, head to Lord Shaxx to purchase The Vow.

100 Confectionary Hearts isn’t too many in Destiny 2, so it shouldn’t take you too long to acquire that many. The easiest way to do so is by picking up Crucible bounties.

Keep doing this until you have 100 and then it’s time to buy The Vow.

For more information about Destiny 2, be sure to check out our Destiny 2 Guide Wiki.