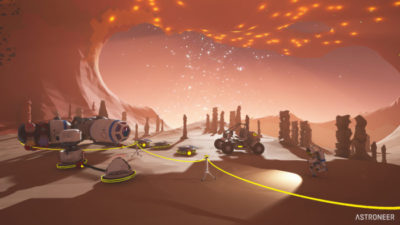 Astroneer, the sandbox adventure game from System Era Softworks has been in early access since December 2016, but it is finally about to release fully. Here is everything you need to know about the Astroneer 1.0 release time.

It was confirmed yesterday that Astroneer would leave early access on both Xbox One and PC, with version 1.0 releasing. System Era Softworks then went on to reveal via their Twitter account exactly when it would release on each platform.

The game will release at 11am ET (8am PT/4pm GMT) on Xbox One, seeing it leave the console game preview program, and it will release on Steam earlier, at 12am ET, so midnight on Feb.6. It should therefore already be out on Steam by the time you are reading this.

There is some additional good news on top of the fact that Astroneer 1.0 is finally releasing. The game will be part of Microsoft’s Play Anywhere program, which means that you only need to buy it on one of the Xbox One and PC to play it on both platforms. Of course, you will need to buy it from the Microsoft Store for it to work.

As it has done since it first release in 2016, Astroneer will continue to get frequent updates as 1.0 is released.

That’s everything you need to know about the Astroneer 1.0 release time. For more tips and tricks on the game, be sure to search for Twinfinite.

Question: What is the Astroneer 1.0 release time on Xbox One and PC?

Answer: The full release of the game will launch on Steam at 12am ET on Feb. 6, and on Xbox One later that day, at 11am ET to be specific. It is also compatible with Microsoft’s Play Anywhere Program, meaning you can play it on both platforms and only pay for it once.