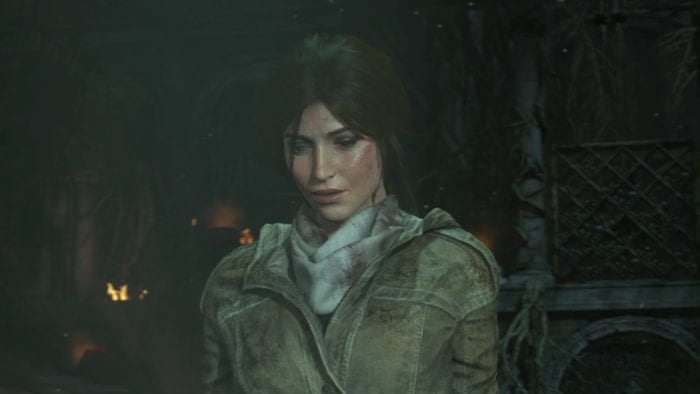 This far into the Tomb Raider reboot sequel, your goal is to save Jacob’s people and prevent the menacing Trinity from obtaining the Divine Source. Before you can do this, though, you have to make your way through the Lost City of Kitezh.

At the start of this area, use the already-established zip-lines to zip across the old city and to the gate of Kitezh. Here, you’ll need to climb up and to the right to reach a trebuchet.

Here, there will be some heavy enemies that you will need to sneak past. Once you’ve made it to the far right corner, equip your broadhead arrows and create a climbable path up the walls.

Climb your newly-made path up to the trebuchet, kill the heavy guards here and then use the trebuchet to break down the Kitezh gate.

Now, go back to the gate and continue through. Head left toward the next gate and prepare for some action.

There are quite a few enemies here for you to take out and you won’t be able to advance without doing so, so equip your favorite weapons and ammo types and do what Lara Croft does best.

With your enemies dead, head through the door and up to the trebuchet. You will need to climb up the structures to get to it now.

Once you’ve made it there, aim the trebuchet at a nearby ledge with a pole wrapped in rope. After that, go to this platform and use rope arrows to connect the pole to the structure the trebuchet is stuck in.

Now head to the other side. Once there, you’ll need to get to the far side of the upper level.

Then, use your rope arrows to close the jug on the lever. Pull the jug under the waterfall to fill it with water until the end with the metal ornament has risen.

Make sure the ornament is lined up with the ice and once it is, release the water in the jug.

Run and quickly jump onto the ornament to swing the ornament into the ice which should break the ice apart and free the trebuchet. Now, take out the archers nearby before using the trebuchet to break down the gate.

You’re getting there, you’re almost out of the Lost City and approaching the end of Rise of the Tomb Raider, just a little bit more…

Again, use your rope arrows to make a zipline to the lower area where the archers you just took out were, which should zip you past the gate. Once here, you’ll see some enemies that you need to take out.

With them out of the way, you’re free to continue forward along the roofs of the structures you’re on. After that, create another zipline using your rope arrows to get you directly to the other side.

Zip across and take out the enemies ahead. Then, climb up the ice wall using broadhead arrows.

Continue up to the tower that leads to the highest part of the city. Once at the top, take out the enemy Trinity soldiers.

With those soldiers taken out, continue forward until you reach campsite. This is the final campsite of the game.

Accordingly, it’s also the last campsite before one of the game’s largest waves of enemies so leave the campsite prepared for a fight. During the fight, near the end, you’ll fall through the floor into a room with even more soldiers.

Take them out stealthily if you can. What happens next is something we won’t spoil, but you’re in for a fun time and a tough decision.

That’s it for how to get through the Lost City in Rise of the Tomb Raider.

With the end of the game in your sights, take a look at our Rise of the Tomb Raider review and let us know if your thoughts align with ours.