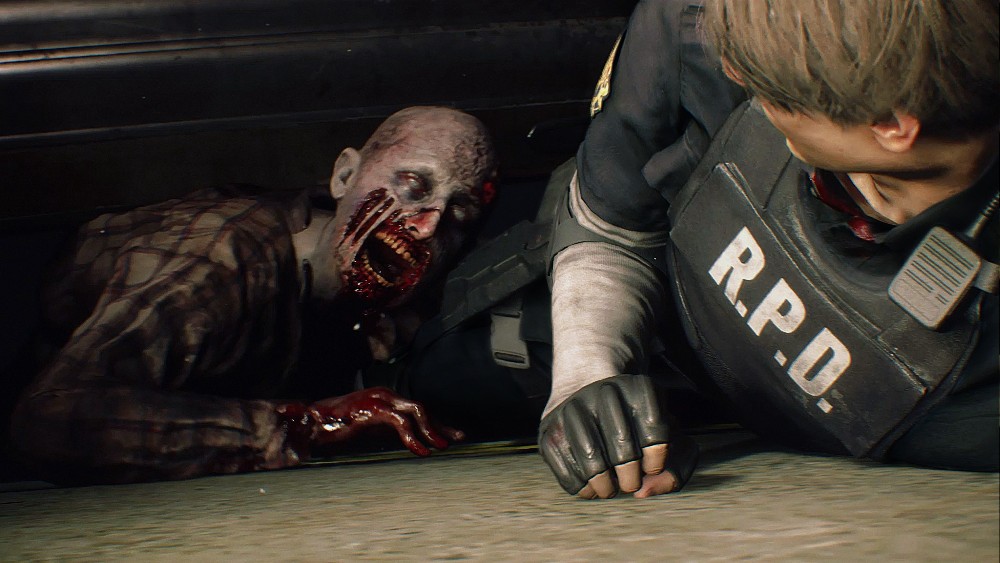 First, let’s go through some of the differences that come with this mode:

So as you can tell, Hardcore difficulty in Resident Evil 2 is no joke, and you’ll really need to pull out all the stops if you want to survive.

Save Often, But Not Too Often

This first tip is probably the most obvious, but it bears repeating anyway. There are no checkpoints in Hardcore mode, which means that if you don’t save your game, you’ll have to restart from the beginning if you happen to die.

That said, you don’t want to be saving your game too often as well, as you might run out of Ink Ribbons quickly and save yourself into a corner.

So when should you save your game? Generally, you should make a save before any potentially risky part of the game. Examples include right before boss fights, right before Mr X‘s first appearance, and right before you know you’re about to go through a scary hallway full of zombies and lickers.

It’s tempting to save your game each time you obtain a new puzzle piece after a long journey, but try to refrain from doing that.

Lickers aren’t terribly frightening on Standard difficulty in Resident Evil 2, but they can be extremely dangerous in Hardcore mode. Instead of trying to kill them, consider sneaking past them instead. If you walk, and you’re careful to keep a bit of distance from them, you can sneak past Lickers fairly easily in this game.

You don’t have to walk slowly to sneak past them; just walking normally will be good enough. However, if you do make physical contact with the Lickers, they’ll pounce immediately. If this happens, run out of the room as quickly as possible to de-aggro them, then walk back in. Unlike zombies, Lickers won’t follow you through rooms.

On Hardcore difficulty, Lickers take a lot more bullets to kill, and can be a massive drain on your resources. Sneak if you can.

Use the Wooden Boards

I know the Wooden Boards don’t seem particularly helpful on lower difficulty settings, but trust me, they can save you from a ton of grief on Hardcore mode.

When you board up an open window, they will permanently keep zombies from climbing through, and that’s an amazing mechanic you should definitely abuse. I recommend boarding up the windows in the west corridor, past the Reception area. It’s also a pretty good idea to board up the window right outside the Dark Room.

You’ll be going through this area very frequently, and considering that more enemies will show up here later in the game, you need every advantage you can get.

Speaking of the west hallway, later in Resident Evil 2, two extra Lickers will appear in this area. Yes I know I said to sneak past Lickers instead of killing them, but for these guys specifically, you should kill them.

They’ll appear during Mr X’s section, and they’ll make your life very difficult if you just leave them be. Take them out with the grenade launcher or shotgun.

Mix Your Red and Blue Herbs

This doesn’t really come into play on lower difficulties in Resident Evil 2, but it can be a huge help on Hardcore mode. Mixing your red and blue herbs and consuming them won’t restore health, but they will give you a slight defense boost for a short period of time.

This allows you to potentially survive an extra hit when exploring areas filled with zombies. These can be particularly useful during the Mr X sections, preventing you from taking too much damage if he happens to catch you with a punch. Of course, if you can get an RGB mix, that’d be even better.

Overall, though, I’d recommend prioritizing R+G mixes since those will give you a full restore. Considering the fact that one zombie hit puts you in Danger status, this is a literal lifesaver.

Immobilizing Zombies Instead of Killing Them

Even on lower difficulty settings in Resident Evil 2, it can take way too many headshots for you to actually kill a zombie. And it’s even worse in Hardcore mode.

So what we suggest doing instead is shooting zombies in the kneecaps to take out their legs completely. They’ll still be dangerous, but they won’t be able to lunge at you, making it much easier for you to dodge them.

I still recommend killing zombies in areas that you know you’ll be coming back to a lot, but for the low priority areas, just immobilize them and dodge as necessary.

How to Deal With Inventory Management?

This is probably the toughest aspect of Hardcore mode. How exactly do you manage your inventory effectively if you have fewer inventory slots? The answer is simple: carry fewer weapons.

I know that sounds scary, but considering that you likely won’t be killing every single enemy you come across on this difficulty, you won’t be losing out on much by leaving some weapons in the save room. If playing as Leon, carrying the handgun and shotgun should be enough for most situations. Similarly for Claire, just carry the handgun and grenade launcher, at least for the first part of the game.

Occasionally, you might consider leaving the handguns in the item box when ammo starts to get low. But as a general rule of thumb, you want to keep your inventory as free as possible for picking up resources and key items. You definitely do not want to keep making second trips to pick up items you missed, so try to maximize each of your trips out of the save room.

Getting the Magnum/ Submachine Gun?

Near the end of the first half of the game in scenario A, you’ll have the opportunity to get the Lightning Hawk magnum as Leon or the submachine gun as Claire. This is also one of the more intense sequences, as you’ll have Mr X chasing you everywhere.

If playing as Leon, we recommend leaving the Lightning Hawk for later, especially if you left the STARS Office Licker alive when you first went through that area. You don’t really need the magnum for the sewers area, as your shotgun should take care of most enemies.

When you unlock the shortcut elevator back to the RPD from the sewers, that would be a good time to get the magnum, as well as the final upgrade part for it.

Not only that, as your handgun ammo starts to run low, you’re definitely going to need an alternative way of dealing with zombies, and the answer lies in the SMG.

Whereas Leon can deal with zombies very easily by decapitating them with the shotgun, things are a little tougher for Claire. With no way to reliably decapitate zombies, it’s better to shoot their limbs off to immobilize them, and the SMG is the best weapon in the game for doing exactly that. You can’t keep relying on the handgun as you reach the sewers, and using the grenade launcher on zombies is kind of a waste, so get the SMG.

What to Craft with Gunpowder?

Speaking of crafting, never ever craft handgun bullets for either Leon or Claire. For Leon, focus on crafting shotgun shells until you reach the sewers, then start hoarding resources to craft magnum ammo. For Claire, always craft acid rounds. The game gives you plenty of SMG ammo, so just save your High-Grade Gunpowder for the grenade launcher.

Crafting handgun ammo should only be used as an absolute last resort, or if you have so much surplus that you can afford to put them towards handgun ammo. Otherwise, hold out for shotgun shells, magnum ammo, and acid rounds.

Over time, Mr X becomes more of a hindrance than a real threat in Resident Evil 2. In Hardcore mode, don’t bother wasting any ammo on him. Whenever possible, just loop him around and run past him if possible.

However, you will eventually find yourself in positions where it can be impossible to run past him, especially if there are other zombies around. Whenever Mr X is around, always make sure you’ve at least got a grenade with you. It serves as an instant stun on Mr X, and will distract or kill all surrounding zombies as well.

For Leon’s final boss encounter against Mr X, it’s worth noting that you can actually run down the timer instead of dealing enough damage to end the fight quicker. If you’re low on ammo, you can actually stun-lock him by spacing out your grenade tosses until Ada shows up with the rocket launcher.

Outside of that, surviving Hardcore mode in Resident Evil 2 is really all about knowing the map layout well, and knowing how to use it to your advantage. Always map out the most efficient way of getting to your destination before leaving the save room, but be prepared to take an alternative path if things go south.