There are few games that perfectly capture the essence of Mario Kart. If you’re looking for games like Mario Kart on the PS4 anyway though, these are your best bets.

Editor’s note: At the time of this writing, there are two yet unreleased games that will certainly be like Mario Kart worth keeping on your radar: the Crash Team Racing Nitro-Fueled, and Team Sonic Racing. We’ll add them here when they come out, but yeah, don’t forget about those!

Onrush is developed by Codemasters, a company known in the racing game scene for franchises like Dirt and the F1 games.

Onrush is quite a bit different to these, having more of a focus on combat and boosting. In fact, Onrush is unique in that it is a driving game where the objective isn’t to reach the finish line first.

Instead, modes focus around completing other specific objectives. For example, the Overdrive mode requires teams to boost as much as possible, and the Countdown mode requires players to quickly pass checkpoints in order to refill a draining timer.

Onrush is different to any other driving games releasing today, and the risk certainly paid off for Codemasters. We scored it a 4.5/5 in our review. 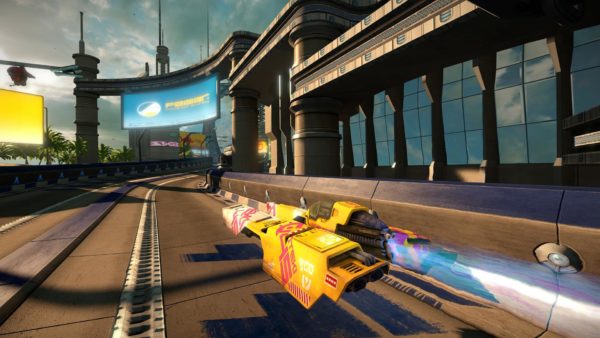 It’s a shame that Nintendo seems to have forgotten about its F-Zero franchise, but Sony has been filling that void for quite some time now with the Wipeout franchise.

Wipeout is perhaps a better pick for Mario Kart fans than F-Zero thanks to its inclusion of weapons. Not only can you zip past other racers at the speed of sound, but also obliterate them with some missiles or rockets, just like Mario Kart’s shells.

There’s plenty of content to work through in Wipeout Omega collection, either alone or in multiplayer. This collection combines everything from Wipeout HD, Fury and 2078 into one package.

Not only does Wiepout Omega Collection play great, but its 4K visuals at a rock-solid 60 fps makes it one of the best-looking and technically impressive racers on the system. 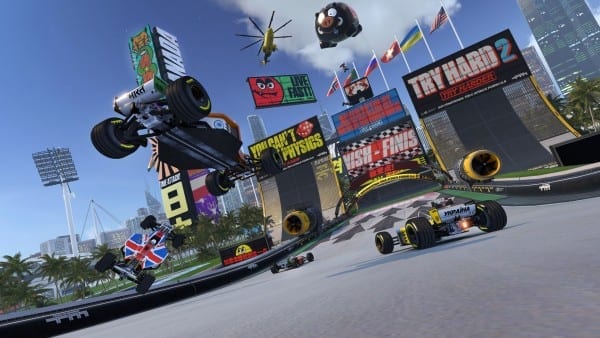 If you’re a fan of Mario Kart’s over-the-top track design, then you really can’t go wrong with Trackmania Turbo.

It’s a fast-paced arcade stunt racer with some truly insane tracks to race around. You’ll be greeted with several loop-de-loops and giant chasms to leap as you attempt to beat the course faster than your foes.

For more co-op fun, the game features a Double Driver mode that allows two players to control the same vehicle. If you want a game to test out the ties of your friendship, then here you go.

Trackmania Turbo is no slouch when it comes to amount of content. With over 200 tracks available and a track editor mode, there’s certainly hours upon hours of fun to be had with this game.

Take Mario Kart, replace Mario with Spongebob, Yoshi with Leonardo, and Baby Luigi with Tommy Pickles, and you’ve got yourself Nickelodeon Kart Racers.

Literally, if Mario Kart with Nickelodeon characters sounds like fun, look no further than Nickelodeon Kart Racers, as that’s exactly what this game is.

Nickelodeon Kart Racers even uses slime, the gooey substance etched into the Nickelodeon legacy, as a gameplay mechanic. Driving through slime fills up slime tanks which can then be used to boost.

This one’s good if you’re looking to pick up a Mario Kart-like game on PS4 for your young ‘uns.

However, unlike Mario Kart, you’re not just flipping your opponents over to halt them for a second or two; in Flatout 4, it’s possible to completely destroy parts of the environment and other cars and is heavily encouraged.

It lacks item pick-ups, but it’s just as fun — or arguably more fun — to screw up your friend’s day by completely throwing them out of their vehicle with a massive crash.