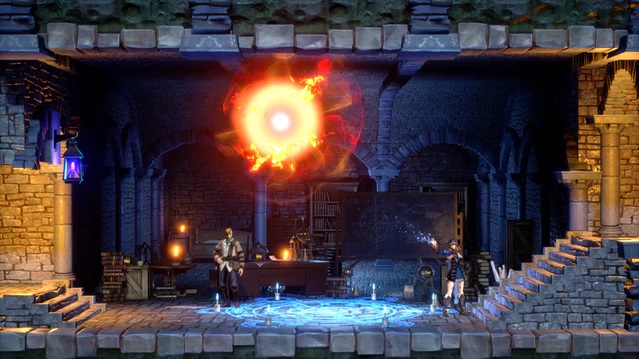 Bloodstained: Ritual of the Night isn’t ready for release just yet, but Koji Igarashi promises development is pushing forward and is more than willing to show off the latest fruits of his team’s labor.

Last year, many gamers who backed the Kickstarter campaign for Bloodstained: Ritual of the Night got to play the beta backer demo. They witnessed much of what the game has to offer, including the item crafting and shard upgrading systems. In today’s development update, Igarashi demonstrated what happens when you combine the two systems: shard crafting.

For those of you who don’t know, shards function as Bloodstained’s magic spells. Shards occasionally drop from enemies, and once equipped, let players do everything from summon familiars to toss ethereal spears.

In previous versions of the game, players could only upgrade shards to deal more damage with spells or gain larger stat boosts. However, with shard crafting, gamers can collect shards and various reagents to create new, devastating attacks and abilities.

Don’t confuse shard crafting with shard upgrades, though, because Riga Dohin isn’t any stronger than Riga Storaema. Instead, it’s a sidegrade that lets players aim and unleash a giant explosion of magical fire.

Moreover, unlike Bloodstained’s regular item crafting, shard crafting only consumes the reagents and not the shards. This means players who want both Riga Dohin and Riga Storaema won’t have to search high and low for another Riga Storaema shard; it will be sitting in their inventory, safe and sound.

While shard crafting is a welcome addition, it didn’t take up all of the dev team’s time. According to Igarashi, the developers were also hard at work fixing various bugs, including a particularly nasty one that used too many system resources for lighting. Good to hear that optimization is high on Igarashi’s list of priorities.

Bloodstained: Ritual of the Night is scheduled to release eventually this year for the PC, Xbox One, PlayStation 4, and Nintendo Switch.