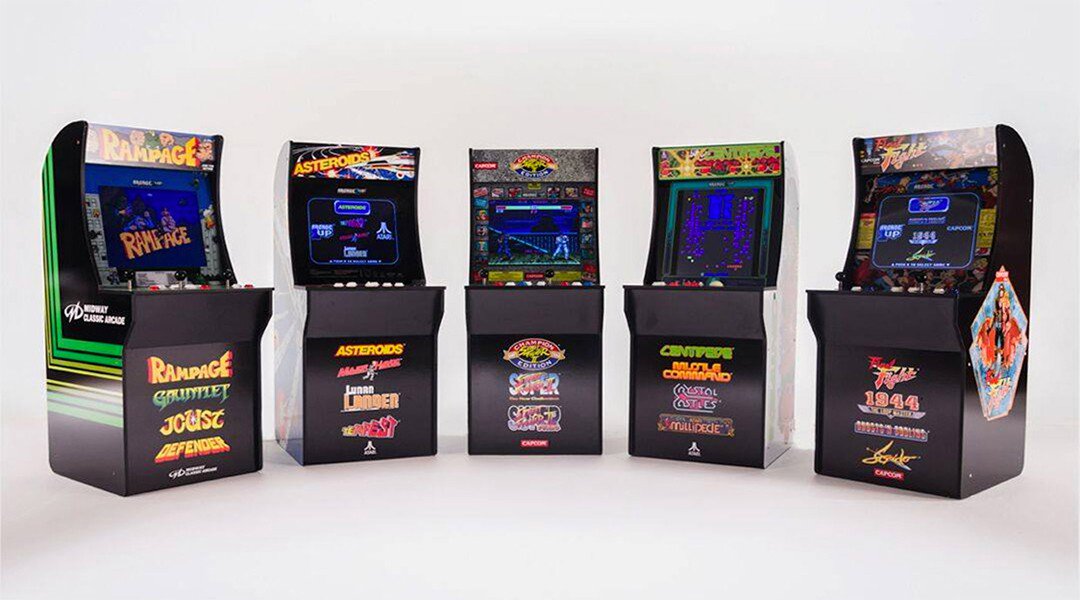 Arcade 1Up gained a lot of popularity this past holiday season with their affordable arcade cabinets designed to fit in the home. New video footage from CES 2019 reveals that the company has several new cabinet designs planned for release later this year.

The video posted by Kio ÐÎÊKÎÑ, gives a detailed tour around Arcade 1Up’s CES booth. During the video, several of Arcade 1 Up’s upcoming products can be seen, including a new line of smaller bartop arcade cabinets (at 36 min).

The bartop arcades come pre-assembled and stand a little over a foot tall. All of the same quality arcade controls come packed into these smaller cabinets. Thus making them the perfect option for someone with a limited amount of space who doesn’t want to sacrifice the authentic arcade look and feel. These will retail for $179 each.

It doesn’t stop there, however, two more new designs can be spotted in the video as well. The wall mounted cabinets (42 min), which are larger than the previously mentioned bartop style, will retail for $199. These offer the ability to be hung on the back of a door or mounted on the wall. The design is slim yet it manages to keep that classic arcade look.

Both the bartop arcades and wall mounted units will come in a variety of styles such as Pac Man, Galaga, Asteroids, Centipede, Ghosts and Goblins, and several others.

Finally, the new Street Fighter 2 Cocktail Cabinet (32 min) was revealed. This is the first time Street Fighter 2 has ever been officially playable in the cocktail arcade format. This product has still yet to receive a price point, but all of these products are expected to hit stores in 2019.

Alongside all of the new designs, Arcade 1Up also revealed their new line of retro bar stools. The stools feature artwork from several classic games, with popular favorites like Pac Man and Street Fighter receiving their own designs. The stools will come in two sizes and retail for $49.99.

Arcade 1Up’s original 3/4 scale arcade cabinets can be purchased in stores or online now for $299.