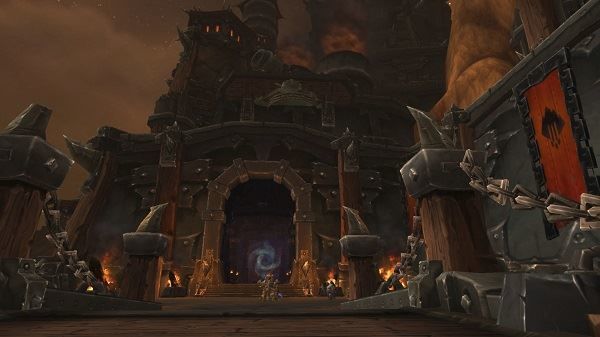 World of Warcraft is still pumping out content for its latest expansion, Battle for Azeroth. However, there are some players who want to play older content from previous expansions, because obtaining that gear will allow you to transmogrify it onto your new gear. So if you like a particular piece from an older set you can take the appearance of that item without losing the stats of your highest level gear.

Blackrock Foundry is a raid that was introduced in the expansion Warlords of Draenor. Blackrock is the ancestral home of the Blackrock Orcs. It contains ten bosses and is the source of tier 17 raid gear.

Where is the Blackrock Foundry Entrance?

You’ll want to fly to Skysea Ridge which is located in Gorgrond. You should run south towards the pit and when reaching the eastern edge of the pit turn north. Follow this until you reach the meeting stone. Once at the meeting stone you’ll be able to join the instance line with others players to initiate Blackrock Foundry.

Once inside you’ll find quite a lot to do. There are plenty of boss fights and loot to be had. Of course, if you don’t have a raid team to complete this with you can check the Legacy raid group finder.

This will allow you to find a group of players also looking to do Blackrock Foundry and get a pickup group going. This can be found in the LFG tab in the bottom right-hand corner of the screen. Just click the eyeball and select the Raid Legacy tab from the drop-down menu.

Once you’ve teamed up the raid should be relatively easy considering the newest gear available in Battle for Azeroth is miles ahead of where you need to be for this older raid.

That’s all for where the Blackrock Foundry Entrance location is in World of Warcraft. For more tips, tricks, and guides be sure to check out Twinfinite.

WoW: How to Get Snowstorm Mount
How to Get & Play on the World of Warcraft PTR (Public Test Realm)
Best MMORPGs 2020 to Play Right Now