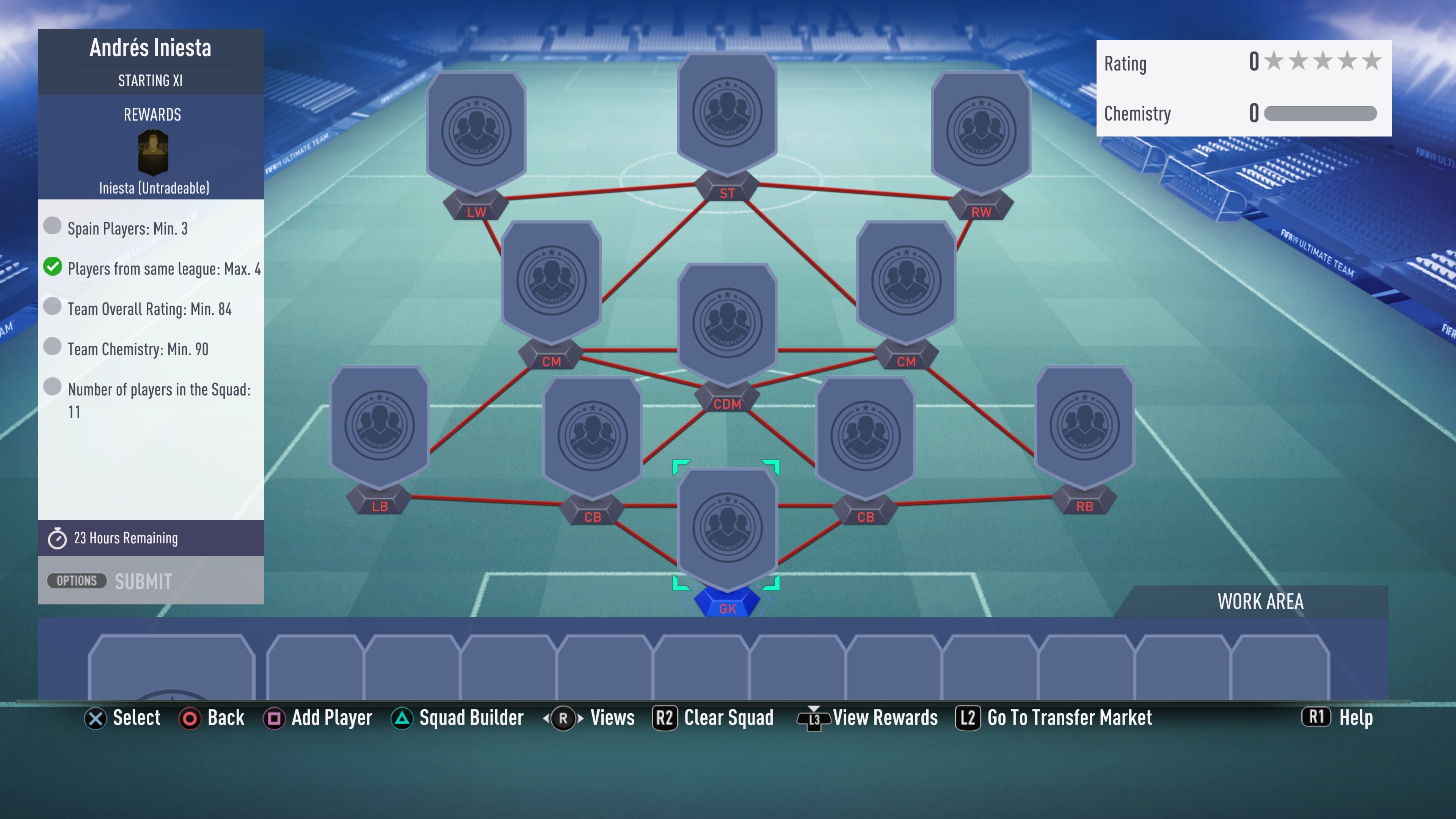 How to Complete Andres Iniesta FUTmas SBC in FIFA 19

FUTmas has finally arrived in FIFA 19 and the fourth set of player SBCs have been released. One of them is Andres Iniesta of Vissel Kobe in the J League. Here’s everything you need to know about how to complete the Andres Iniesta FUTmas SBC so that you can add him to your Ultimate Team.

If you head to the Squad Building Challenges tile on the FIFA 19 single-player screen, you’ll see Andres Iniesta’s item on the Live section of SBCs. Click on his icon and you’ll be able to start putting it together.

While Iniesta is the highest rated of this set of FUTmas cards, he’s the most affordable. That’s probably down to the fact that his league makes him hard to link in teams that aren’t Spanish. He does have a terrible 55 stamina, too.

However, to complete his SBC, the best thing to do is pick three league and use players from the same nation to get strong/green chemistry links.

For example, start in goal and link a Spanish La Liga goalkeeper to the CBs and CDM in the formation. Keep them all from the same nation and league and they’ll all be good for chem.

Then, do the same for the LB, Left CM, LW, and ST. Then, finally, link the RW, Right CM, and RB together. For each set, keep the same league and same nation. You’ll finish on 100 chemistry this way, so you have some leeway to use fewer Spanish players if you want. The 90 chemistry barrier in the challenge is higher than others.

We will update you here at Twinfinite as more FIFA 19 FUTmas player SBCs are released. Alternatively, you can check out EA Sports’ Twitter, where they’ll reveal the new players at 1pm ET each day.

That’s everything you need to know about how to complete the Andres Iniesta FUTmas SBC so that you can add them to your Ultimate Team. For more tips and tricks on the game, be sure to check out our FIFA 19 wiki guide.

Question: How do you complete the Andres Iniesta FUTmas Squad Building Challenge?

Answer: You need to head to the SBC section of FIFA Ultimate Team and complete the squad, using three Spain players and an 84 rated squad.