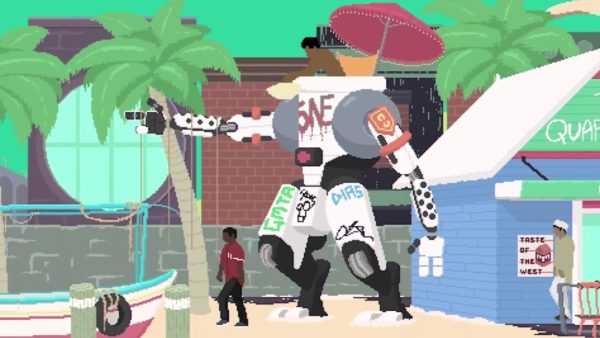 Developer Akupara Games announced today that Desert Child, a game inspired by anime series like Cowboy Bebop and Akira, will be launching on Dec. 11.

The game sports a pixel art style reminiscent of the 8-bit or 16-bit era. In Desert Child you play as hoverbike racer, and your goal is to race in the Grand Prix taking place on Mars. Humans have been slowly migrating to Mars from Earth as it becomes more and uninhabitable. Through the game you complete various tasks like bounty hunting, competing in races, and even delivering pizzas with ambition to upgrade your bike and beat the competition.

Also you might need to fill up on as much ramen as you can because you’ll definitely need to upgrade your bike with weapons to protect yourself from bounty hunters, gangsters and others as you traverse a beautiful pixel art universe. Featuring a lo-fi hip-hop soundtrack, you can jam with friends as the game also supports local multiplayer.

However, even if you play solo you’ll have plenty of interesting NPCs to talk to all across the solar system. Just don’t forget to pay your rent.

Desert Child is slated for release on Dec. 11 for PS4, Xbox One, PC and Nintendo Switch. The game is currently available for pre-order.