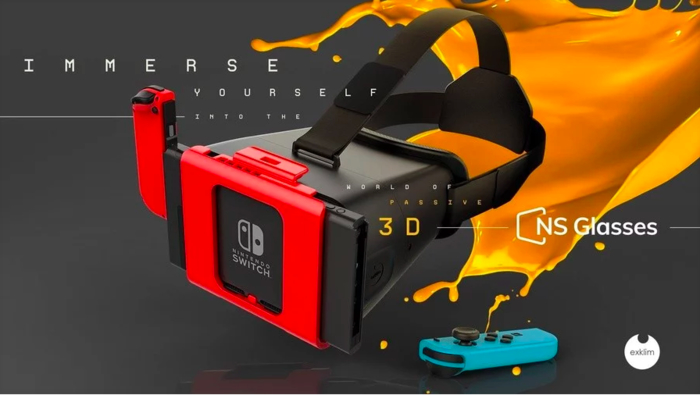 Nintendo has said time and time again that they’re just not interested in bringing any kind of VR experiences to the Nintendo Switch. Nintendo of America President, Reggie Fils-Aime, has even stated that VR just isn’t there yet in terms of being actually fun, which is what Nintendo is all about.

Since Nintendo isn’t doing anything in the VR space, it’s up to other companies to bring virtual reality to Nintendo’s fresh hybrid console. Via Nintendolife, a Canadian company called exklim has announced their own VR-style headset that’s exclusive for the Switch which is called NS Glasses –here’s how it apparently works:

“It features a locking mechanism to keep your Switch securely in place, leaves holes to allow the console’s fans to work correctly, and even allows your Joy-Con to remain attached should you wish to charge them while you play. It’s said to come with a “comfortable” face pad and adjustable headband, and is even compatible with every single game currently available for the system.”

The technology within the headset draws out specific colors and shades from whatever game it is that you’re playing, recreating the visuals of a VR game but not really simulating the tried and true effects of an actual VR headset like the Oculus or PS VR. While the idea seems cool in theory, it remains to be seen whether or not the NS Glasses will shake up the VR world at all.

If you are interested in checking the headset out for yourself, you can pre-order the “glasses” for 50% off right now which will only cost you $50.

Oculus Quest 2 Coming for $299 this October; Rift to Cease Production