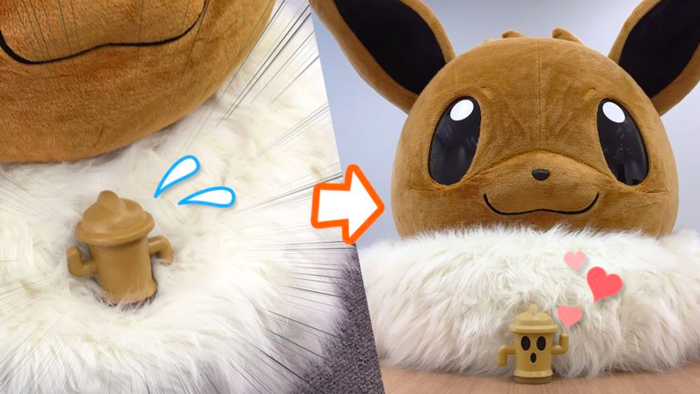 Nintendo has announced that starting tomorrow, the biggest crossover event in history will be taking place. In Animal Crossing: Pocket Camp, a special Poke Ball scavenger hunt will commence that features adorable-looking Eevee-themed items for you and your friends to gawk at. This is apparently the first time that Pokemon and Animal Crossing have crossed paths since the Pocket Pikachu was featured as an item in the GameCube iteration of Animal Crossing (via Serebii).

Some talented data miners have already uncovered some of the items that will be included in the scavenger hunt, which you can check out right here –there are Eevee shirts, Eevee hats, and pretty much Eevee everything.

This collaboration with Eevee is most likely due to the upcoming release of Pokemon Let’s Go Eevee and Pokemon Let’s Go Pikachu, which stars the two respective characters as the main partner Pokemon that’ll be following you on your adventure through the Kanto region. Maybe this means that we will soon be getting a Pikachu-themed event in Pocket Camp – we would love to walk around the campsite donning some cute Pikachu ears.

If you’re still playing Animal Crossing: Pocket Camp, make sure to check out our awesome guides that are chock-full of handy information regarding the mobile game. We can help you out with certain things like upgrading your camp and obtaining a Santa hat, just in time for the holiday season.