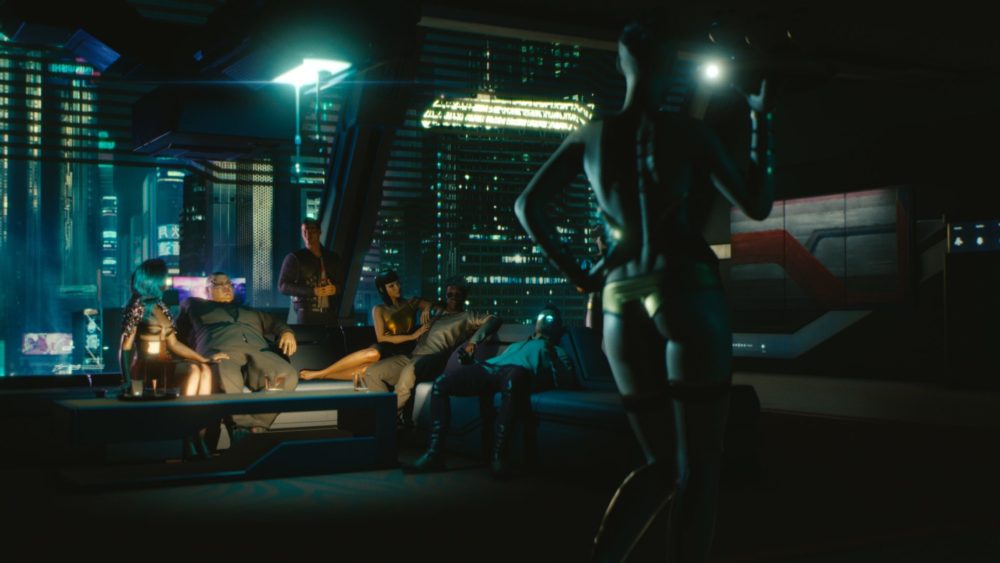 Given that it’s literally named after the genre, it probably shouldn’t come as too much of a surprise that Cyberpunk 2077 encompasses pretty much every cyberpunk trope in the handbook. For starters, the game’s urban environment is dystopian megacity full of skyscrapers adorned in advertisement boards that emit almost radioactive amounts of neon & virtual celebrities —everything you’d expect to see in a Blade Runner movie or imagine in a William Gibson novel. Even its villains are your textbook Corporate Samurai’s, just like Gibson’s most protagonist, Case.

But the recent gameplay reveal showcases way more than just a smorgasbord of ideas thrown over the top of a Grand Theft Auto-style open world in first-person. No, Cyberpunk 2077 —or at least the version we’ve seen so far— gets three aspects of the genre so absolutely bang on that it totally captures the magic of what fans adore about this branch of sci-fi. So let’s break them down.

Now there was one aspect to the Cyberpunk 2077 reveal that I noticed wasn’t universally appreciated by many spectators that we saw in various forums, comments, and critical analysis. No, not the damn first-person thing… I’m talking dialogue and writing, which was somewhat criticized for being too short and sharp, over-using profanities, and generally a little corny. I hate to break it to you guys but that’s somewhat of a hallmark of the genre. That’s not to say that all things cyberpunk follow the exact same beat with respect to how dialogue is approached, but there I believe there certainly is a method behind why its implemented in Cyberpunk 2077, and it’s definitely not as a result of bad writing.

If you’ve read William Gibson’s Neuromancer, which is essentially the genre’s founding literature, you’ve probably experienced some slight confusing following along. Gibson’s dialogue in Neuromancer is heavily based on Noir. The writing is not meant to coddle you, it’s meant to create an atmosphere: things are happening and even the participants don’t know the full story. People don’t talk plainly to each other because everyone is “working an angle”, hustling for their own survival and profit. You’re supposed to be kept on your toes about who to trust, and having to decipher that language is almost part of that. It’s supposed to be exotic, in a way —both an evolution and a degradation of language in a futuristic world. At least, that’s how I imagine Gibson hoped it would sound when he wrote the book in 1980, which has now become a template for the genre.

Yes, it has a slightly retro-corny flavor to it occasionally, and I’m equally curious to see how it holds up over the course of a 100-hour RPG, but that doesn’t mean the banter and general dialogue we saw in Cyberpunk 2077 isn’t suited to the source material.

If there’s one thing that screams Cyberpunk, it’s the concept of being able to “Jack In,” a term first coined by, you guessed it, William Gibson, in his novel Neuromancer. We’ve also seen it a bunch of other literature, film, and other forms of cyberpunkdom over the years —perhaps most notably, the Matrix. But I want to focus less on the fact that the whole “jacking in” thing has been included in Cyberpunk 2077, because I think that it was always a given we were going to have some sort of reference to it, and more on the way it’s being handled and how it’s being incorporated as a gameplay mechanic.

In Cyberpunk 2077, of course, we see NPCs “jacked in” as part of the background aesthetic to certain scenes, like when the heavily augmented thugs are selling V the Spider-bot device. But I’m much more interested in how it functions as a means to upgrade abilities, which is totally awesome. Visiting Ripper Doctors allows V to install and upgrade new cyberware, and the whole thing plays out like a visit to mad scientist, injecting wires into your arm in a real-time cutscene that’s so much cooler than the menus we’ve seen in games like Deus Ex Mankind Divided.

And it’s not just the operation of upgrading abilities or the tangential background goings-on of NPCs in which the concept of “jacking in” comes into play in the Cyberpunk 2077 gameplay demo. In the same scene I alluded to before, the deal for the spider-bot goes belly up after the cred-chip V hands over for the purchase turns out to contain a virus. True to another cyberpunk trope, everything is online and everything is connected in this dystopian future.

You’re going to hear this term a lot in the build-up to and the launch window of Cyberpunk 2077. High-tech, low-life pretty much sums the entire cyberpunk genre up in four easy words. It describes everything from the towering super-cities and their underbellies to the advantages of transhuman augmentation to the degradation of social life as a result. So maybe you could say citing this as a single trope is somewhat odd, but honestly, Cyberpunk 2077 does such a great job of showcasing just how technology-obsessed society has become.

V can obviously be augmented, and adding these upgrades isn’t limited to Cyberpunks —regular citizens walk around brandishing their tech on display. But it’s the appearance of the folks that have taken things just a little bit too far —at least to our unsullied bodies— that is so wonderfully disturbing. You have to appreciate the level of art and design that’s gone into imagining their designs, and I particularly love the individuals that can actually remove their jaw, so great is the composition of their faces comprised of metal.

Unlike Deus Ex, Blade Runner, or even the grim adventure horror, Observer, the reality of Cyberpunk 2077’s world is that augmentation is something everyone does, and it’s accepted. I’d equate it to something like an addiction to tattoos and piercings. That doesn’t sound very low life, I know, but perhaps it’s more about the resulting impact on society as a whole rather than the individual repercussions of the technology. Cyberware and implants don’t make you ill or ostracized, but they’ve likely given birth to crime and oppression.