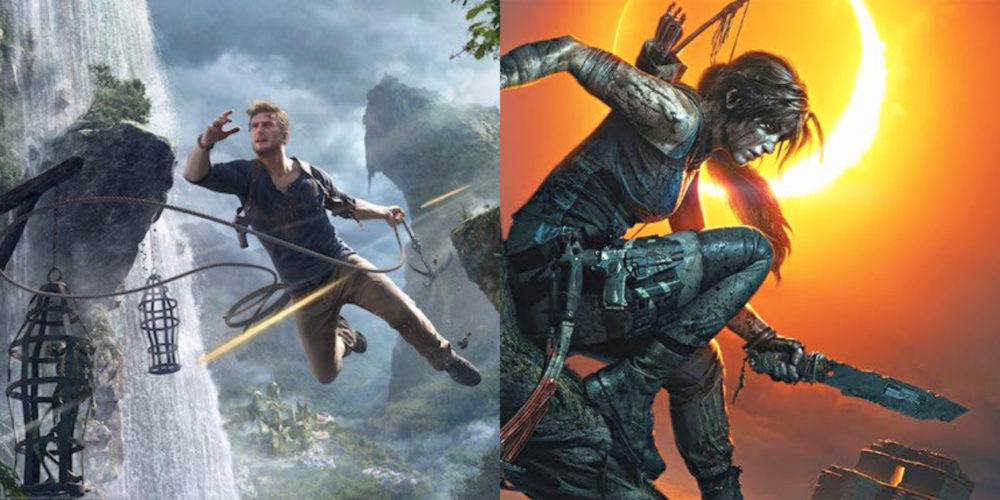 Shadow of the Tomb Raider marks the end of the rebooted Lara Croft trilogy, and for our money, it’s the most polished of the three games. While it didn’t quite take enough risks to elevate the experience into the realms of truly special gaming experiences, it certainly refines the familiar formula into a streamlined package that’s super entertaining. It’s also by far the most pretty of the three and really nails that feeling of navigating an exotic wilderness. But how good is versus what many would consider the pinnacle of Indiana Jones-style third-person action/adventure games, Uncharted 4? We’re pitting the two against each other in the ultimate showdown.

Uncharted 4 did plenty to move the experience on from the third-person cover-shooting mechanics that dominated the first three games. Sure, that’s still a core part of the experience, but Uncharted 4 introduced some all-new gameplay mechanics that helped to break up the monotony of what increasingly felt like dated gunplay and traversal systems. Stealth was a big one; the emphasis on tagging enemies and moving through areas undetected felt much less like a scripted sequence than in previous games. And that was made possible by the game’s substantially larger environments, which allowed players to move around the environment and choose to tackle situations differently according to preference.

Traversal mechanics in Uncharted 4 remained virtually the same, except streamlined for more accurate climbing. And, of course, the grappling hook was introduced, which had players swinging between ledges and even engaging enemies in combat while dangling from above.

Shadow of the Tomb Raider also changed the pace of gameplay from previous titles in the series. Although most of the mechanics remain in-place, there’s a much greater emphasis on stealth action. There’s no tagging, funnily enough, which has become a hallmark of stealth games since Ubisoft’s Far Cry popularized the mechanic. That’s perhaps because Shadow of the Tomb Raider is a more linear experience.

Shadow of the Tomb Raider isn’t all stealth, though, but when the action does light-up, it feels a little clunky –even compared to previous games, let alone Uncharted 4.

Of course, the rebooted Tomb Raider games feature progression and survival mechanics that give players different skills, weapons, and items to craft. Ultimately, you’ve got a much stronger input in how Lara plays as a character. It’s hard to mark Uncharted 4 down for a lack of progression –the series has always been about blockbuster action and non-stop pace, so slowing things down to Tomb Raider pace probably wouldn’t have been a good fit. But there’s definitely more substance to Tomb Raider’s gameplay as a result of that progression.

In terms of platforming, Tomb Raider’s traversal is a step above Uncharted 4. Nate looks just as cinematic in his movements, but in terms of how the game handles, there’s just more to Lara’s climbing to keep players engaged. Having to coordinate pressing different buttons to catch ledges and climbing walls, and then jumping between swinging points and deploying a grappling hook in mid-air requires more fidelity and ultimately keeps you locked into the experience. By comparison, Uncharted 4 really just asks you to press a single button –it’s pretty but all a bit too simple.

Lastly, we have to mention replayability and content in relation to the gameplay experience. Here, Shadow of the Tomb Raider certainly has more to offer than Uncharted 4. From the dozens of Tombs, Crypts, and additional side quests that stand next to hundreds of collectibles and points of interest, the game’s semi-open world is alive with content to explore. In comparison, Uncharted 4 is a pretty linear experience even with its larger level design. There are still places to explore off the beaten path and collectibles to find, but you’re going to have much less reason to replay the experience (or keeping playing the experience) than in Shadow of the Tomb Raider.

Winner: Shadow of the Tomb Raider

Naughty Dog has long been hailed for its prowess in the graphical department, and two years after its release, Uncharted 4 is arguably still the PlayStation 4’s best-looking game. Recent exclusives such as Horizon Zero Dawn and God of War certainly give it a run for its money, but there’s something about Uncharted 4’s motion capture and facial animations that keep it a step ahead of other contenders. Its environments are also utterly gorgeous, from the incredible lighting to the astounding water effects.

Don’t let any of that make you think that this page is a foregone conclusion, though. Shadow of the Tomb Raider is still stunningly attractive in its own right. There’s definitely a disparity in the quality of lip-synching and motion capture, but the environments are right up there neck and neck with Uncharted 4. The lighting in Shadow of the Tomb Raider is particularly impressive and it really makes the dense vegetation of the Peruvian jungle come to life. In combination with all the chirps and whistles of the jungle wildlife in the background, it transports you to the outdoors in a way that even Uncharted 4 can’t quite muster.

Lastly, we couldn’t talk about graphics without mentioning the cinematic set-pieces of both games, which have been such a hallmark of both series’ in the current generation. The near-misses, close-calls, and spectacular action sequences that have players on the edge of their seats are a big part of what makes these action/adventure titles so absorbing, and both Uncharted 4 and Shadow of the Tomb Raider have them aplenty.

Uncharted 4 actually was criticized for lacking big set-piece moments compared to previous outings, but there are still some brilliant moments. One that springs to mind is when Nate is dragged behind a truck, almost mud-skiing behind the speeding vehicle as he evades obstacles and gunfire.

Shadow of the Tomb Raider has its moments, too. Even from its earliest moments, Lara is thrown into seemingly impossible situations, like tumbling down Cozumel’s tsunami-flooded streets before leaping between floating cars and grappling the sides of crumbling buildings to safety. It’s high-intensity stuff, and often more interactive than Uncharted 4’s set-pieces, but ultimately less spectacular.

For overall graphical presentation, we still have to give the nod to Uncharted 4, overall. Running on a PS4 Pro and a 4K TV, it’s arguably one of the best-looking video games of all time.

Director Neil Druckman has been lauded as one of the gaming industry’s most accomplished writers after having co-written The Last of Us, and Uncharted 4 features that same level of quality. All of the characters are brilliantly well-written in Nate Drake’s final adventure, and we get to see a different side of Nate and his relationship to Elena. There are also new characters in the form of his brother, Sam Drake, and Nadine Ross –though we weren’t quite as enamored with them as we were with the rest of the returning cast.

Overall, Uncharted 4 has to be one of the series’ best stories. There’s all the nostalgic comradery between Nate and Sully, a new dynamic with Sam in the mix that takes us back to he and Drake’s childhood, and a gripping wider story that has them globe-trotting around exotic locations on the trail of pirate’s treasure. It’s glamorous and heart-pounding stuff.

Shadow of the Tomb Raider caps off the rebooted trilogy story, and really ups the stakes from previous games. Lara is once again battling against the dangerous Trinity organization, except this time there are cataclysmic events to contend that threaten the entire world. There’s also plenty of the supernatural incorporated into this particular Tomb Raider story. It’s a tonally darker and more serious affair than even her previous recent adventures, totally opposite to Uncharted’s cheeky wit and over-the-top action. But it’s never really engaging in the same sort of way, despite all the drama and tension. Lara Croft isn’t especially likable throughout the game and we found her overly serious without any tension-breaking moments to balance the narrative.

The rebooted Tomb Raider games haven’t been praised for their stories and Shadow isn’t any different. It’s not poor, but it can’t hold a candle to the nuances of Uncharted 4’s superb writing. Uncharted 4 takes this one easily.

Both Uncharted 4 and Shadow of the Tomb Raider arguably represent the pinnacle of their respective series. On the surface, they’re similar sorts of experiences, though in reality they actually play very differently –and the tone of their stories are totally at odds with each other. Still, at the end of the day, they’re third-person action/adventure titles heavily inspired by intrepid action heroes like Indiana Jones, set amid exotic environments and spanning ancient ruins and mythology.

Honestly, you should go and play both games. But if you’ve only got the time for one, we’d still have to crown Uncharted 4 as King of this particular flavor of action-game. Again, they do offer slightly different takes on buccaneering sort of action, but Uncharted 4 represents the better overall package.