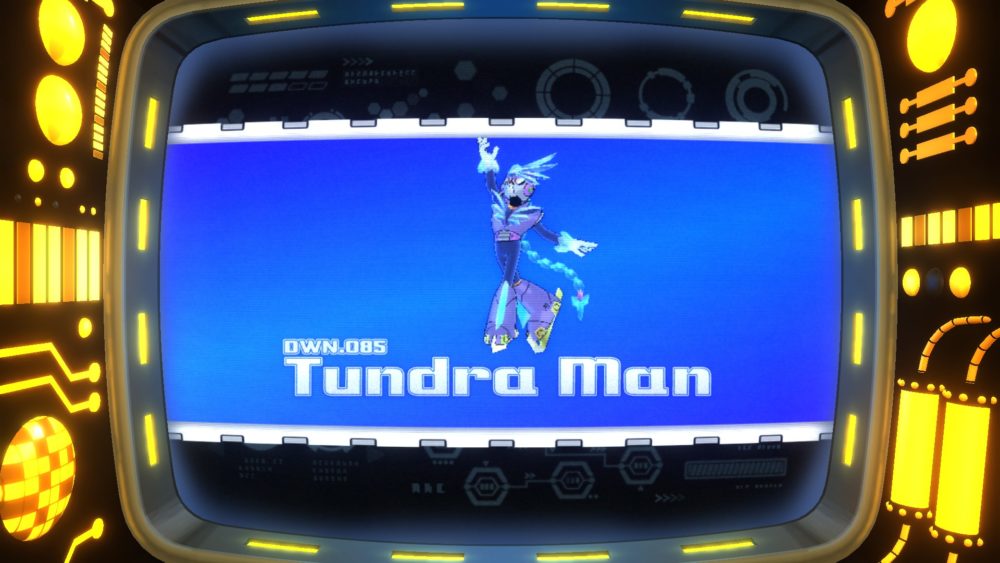 Capcom has revealed the next Robot Master to appear in Mega Man 11. Tundra Man is an ice boss with a thing for figure ice skating. He slides around, performs pirouettes, and sails elegantly through the air as Mega Man struggles to take him down.

Prior to going rogue, Tundra Man was a robot that would survey the various environmental changes on the coldest areas of the planet. With no one to keep him company, Tundra Man ended up watching an ice skating championship on TV. Inspired by what he saw, Tundra Man decided on his new calling, the fine art of figure skating. He has since taken charge of a frozen museum that Mega Man must wrest back.

The museum that Tundra Man’s stage takes place in boasts different hazards from Bounce Man’s Boing-Boing Park. This museum hosts dangerous icicles on floors, walls, and ceilings. As you might expect from a Mega Man game, running into spikes like these are an insta-kill for the Blue Bomber. The floors are also slippery, making an accident more likely than usual.

Some examples of enemies you’ll see include robotic snowflakes that quietly float downwards, birds that drop frozen blocks of ice from up high, and stationary Gabyoall security robots that lie in wait amongst the slippery terrain.

The mini-boss of this stage is a robot resembling a giant mastodon. Aside from crashing around the room, it also drops giant icicles from the ceiling that you must evade. You’ll have to get through this dangerous foe to face Tundra Man.

As for the Robot Master himself, he will constantly pirouette and perform aerial twists as he skates towards you. Because his movements are so deceptive, you’ll also need some agile moves of your own to best him at his own game.

Defeating Tundra Man nets you the Tundra Storm ability. With this, Mega Man summons a whirlwind of ice that freezes any nearby enemies. Performing this move with the Power Gear on will affect the entire screen.

If you haven’t tried it already, there is a Mega Man 11 demo that’s available now featuring Block Man’s stage. Beating this stage will add to a challenge that could potentially reward you with some useful items when the game launches.

Mega Man 11 launches for Xbox One, PlayStation 4, Nintendo Switch, and PC on Oct. 2.

Paper Mario: The Origami King Gets a Ton of New Gameplay Footage During Nintendo Treehouse Live