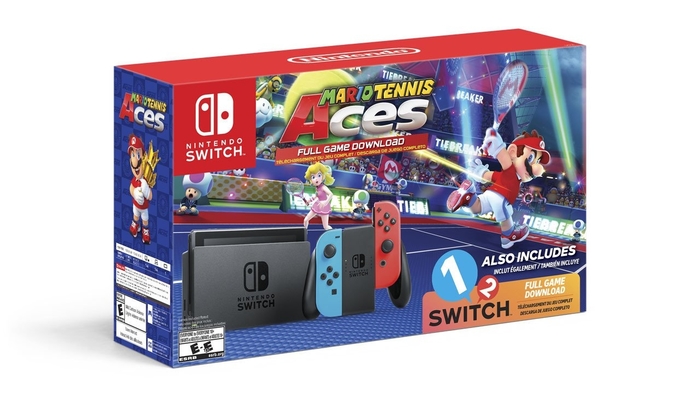 Okay, summer isn’t even over yet, but we’re sure that you guys have been thinking about Christmas already, no? Come on, for those that do not have a Nintendo Switch yet, we know that you’re thinking about asking Santa for the new console when the time comes around. Luckily, Nintendo is releasing a pretty sweet bundle next month for those that need that early gift for the holidays – either for yourself or for your loved ones. This Nintendo Switch bundle comes included with a download code for both Mario Tennis Aces and 1-2-Switch, which will provide loads of multiplayer fun right out of the box.

Jump into the world of #NintendoSwitch or start your holiday shopping extra early with this Nintendo Switch bundle featuring #MarioTennis Aces and #12Switch for only $359! Available exclusively at Walmart starting 9/5. pic.twitter.com/JSrIaRQFG2

This bundle is exclusive to Walmart and only costs you $359.99. So, the Switch by itself costs about $300 at retail and Mario Tennis Aces goes for $60 at retail and on the eShop, essentially giving you 1-2-Switch for no cost at all, if you think about it that way. This isn’t a bad deal for those that have yet to pick up the hybrid system. With the console coming with two controllers out of the box, these two multiplayer-focused games aren’t a bad choice to play with your friends and family around the holiday season.

This Nintendo Switch bundle will be available at Walmart starting Sep 5.