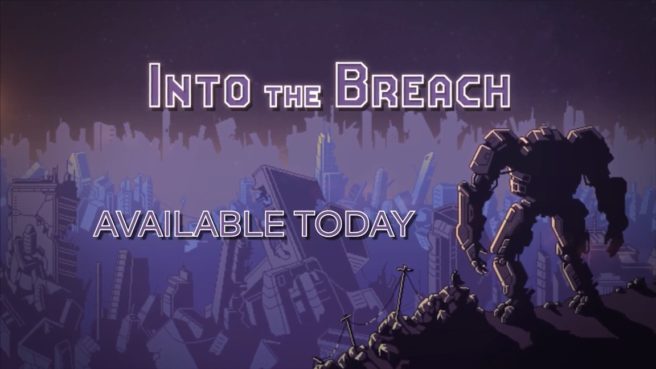 We got some stellar announcements during today’s Nindies direct and it ended with a bang. One of the best turn-based strategy games of the year, Into the Breach, has made its way to the Nintendo Switch eShop and it’s out right now!

Developed and published by Subset Games, the small studio created a game that has the player defending cities and creating mechs for battle.

You’ll find yourself battling aliens, completing objectives, and cycling through units in this turn-based strategy game. Previously released on PC, Into the Breach comes at you with an isometric camera view and will test your skills on the battlefield, pitting you against mechs and other creatures.

After the success of their previous game, FTL, the team at Subset games wants to ensure that Into the Breach maintains the quality that fans hope for. If you’re craving something to tide you over till the new Fire Emblem or even a new Advance Wars, Into the Breach will probably scratch that itch.

Into the Breach is available on the Nintendo eShop right now for $14.99 USD. There is no word on if it’s coming to other consoles, but for now, you can take it on the go with your Nintendo Switch.