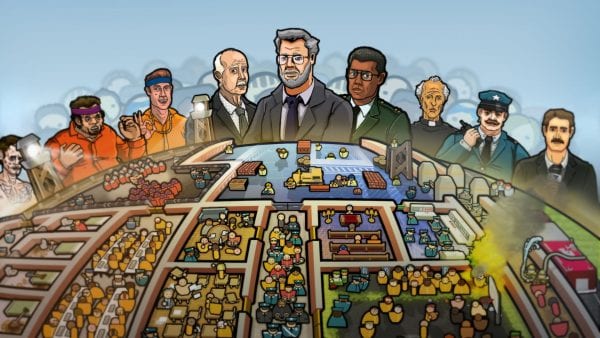 This September, Gold subscribers will get four new free games for the Xbox One and 360 collection. Considering that the busy fall season is almost upon us, though, this month’s offerings aren’t all that enticing. The most exciting title here is probably Prison Architect, which can be played solo or with another friend as you try to figure out how to bust out of prison. Working together, you and your partner have to scout out your surroundings, find an escape route, then craft items and talk to NPCs who might be able to help you out.

If you’re in the mood for some twin-stick shooting action, Livelock is a good one to pick up. There are different chassis types you can play as, and there’s also support for three-player multiplayer if you don’t want to go it alone. Other than that, LEGO Star Wars is always a fun time, and the Sega Vintage Collection is perfect for those who feel like taking a trip down retro memory lane.

You can check out the full list of free games available for Gold subscribers in September 2018 down below:

On the flip side, this month’s PS Plus free games are a little more attractive. First up, Destiny 2 is up for grabs, and this is pretty much the perfect time to jump in if you want to get ready for the upcoming Forsaken expansion. Destiny 2 had its fair share of problems at launch, but the gunplay is tight and fun as hell, and it still holds up as one of the best online multiplayer shooters you can play right now.

God of War III Remastered is also available this month, for folks who just can’t get enough of the God of War universe. This game features extra angry and violent Kratos, though, not the lovable dad from the newest game. Still, this is a good one to pick up for both longtime fans, and series newcomers who might be interested to see what the franchise used to be like.

As an added bonus, Sony is also throwing in Here They Lie for PSVR users, and Knowledge Is Power as a Playlink title. Knowledge Is Power is a party game where you and your friends get to take part in a trivia competition to see who’s the smartest.

You can check out the full list of free games available for PS Plus subscribers in September 2018 down below:

If you’re subscribed to Amazon or Twitch Prime, you’ll also be getting five new free games this month. The main highlight here is Guild of Dungeoneering, which is a fun little title where you get to take on the role of a dungeon master, create your very own dungeon with custom layouts and monsters with a deck of cards.

Pumped BMX+ is a fun stunt biking game, similar to what you’d get with the Trials series, and The Adventure Pals is a lovely little platformer game that features a giraffe. What’s not to love?

You can check out the full list of free games Twitch Prime members can get in September 2018 down below:

As always, Steam features a few free-to-play games every month, and we’ve picked out a few highlights for this September. We Are Terror is a brand new, free-to-play, adventure game about a war between mankind and some sort of supernatural power. The game features four different chapters with four characters, and you’ll get to make decisions that will influence the story and ending.

Wizard101 is an online multiplayer game where players can take on the roles of wizards and engage in a card battle system with different elemental spells to master. Apart from a long and fleshed out storyline to follow, there’s also PvP available for those who might want to test their skills against other players.

And just in case you need more battle royale games in your life, Crazy Justice is yet another battle royale title that’s joining the fray this month. It looks pretty much the same as Fortnite and Realm Royale, and there are also different heroes you can choose from before jumping in.

You can check out all the free-to-play games coming to Steam here.