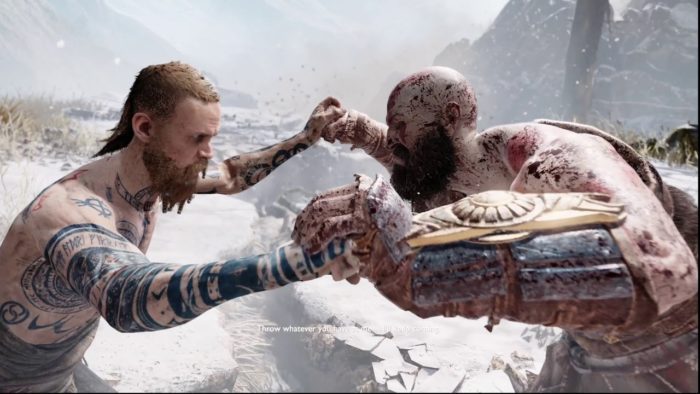 As 2018 wears on and we draw closer to the endless blitz of high profile releases this fall, it’s nice to take a deep breath and look at how this year is shaping up compared to last year in terms of gaming.

From the Ghibli-esque RPG Ni No Kuni 2: Revenant Kingdom and the triumphant return of Kratos in God of War, to stellar indie offerings such as Celeste and Into the Breach, and re-releases of old favorites like Donkey Kong: Tropical Freeze and Bayonetta, this year has been pretty great for fans of almost any genre. From RPG fans to hack-and-slash action nuts, there’s been something for everyone to sink their teeth into and dive headlong into a quality virtual experience. By most measurements, it would even be a year for the record books going by review scores alone, with titles like God of War breaking the record for best reviewed titles of the year or in the history of their console.

Or at least, it would be if it weren’t following the act of 2017, a definitively door busting year for gaming. In addition to seeing the launch of the Nintendo Switch alongside the release of The Legend of Zelda: Breath of the Wild, other critical darlings such as Persona 5, Horizon Zero Dawn, What Remains of Edith Finch, Night in the Woods, Yakuza 0 and so many more made their way to gamers and delivered top of the line experiences that hadn’t been seen or felt in a good long while, if at all. Oh, and like God of War, Breath of the Wild broke its fair share of critical records as well.

For proof, look no further than the review scores for titles for this year compared to last year. Whereas this year has held steady with high 80s and low 90s according to aggregate site Metacritic, last year saw a glut of high profile releases in its early months that ended up with aggregate scores of 90 or higher. Not only that, but thanks to Breath of the Wild, it saw itself become home to one of the best reviewed games in history.

So does that mean 2018 has lagged behind the peaks achieved in 2017? Are we now caught in an uphill battle to catch up to where we were, and will we continue to do so the rest of the year?

In all honesty? Yes. This year is, if only slightly, playing catch-up and will continue to do so until the holiday season. That, however, may be where this year can not only meet, but surpass its forebear.

Whereas 2017 was front loaded with great titles that set it up for early cries of “One of the best years for gaming yet,” this year has played out as more of a slow burn. Highly anticipated titles like Spider-Man, Red Dead Redemption 2, and Super Smash Bros. Ultimate lie just beyond the holiday release horizon, and with indie titles like Dead Cells just getting its full release this week, it appears every genre will have its share of great material to choose from.

On a critical front, things look similarly hopeful. Rockstar, the developers of Red Dead Redemption 2, are no strangers to putting out highly acclaimed products, with their last title, Grand Theft Auto V, still holding a slot above Breath of the Wild as one of the best reviewed titles of all time. Even with last year’s holiday season hits like Super Mario Odyssey and Assassin’s Creed Origins, there’s very little to suggest that Rockstar won’t capture the same magic with Red Dead Redemption 2.

Regardless, 2018 continues to be one worthy of its praise. There’s already been plenty to point toward it being an all-time great for gaming, and come the holiday season, it could have more than enough to back itself up as even better than the last.

For more on how this year is shaping up, check out our list of the seven best video game stories of 2018 (so far).