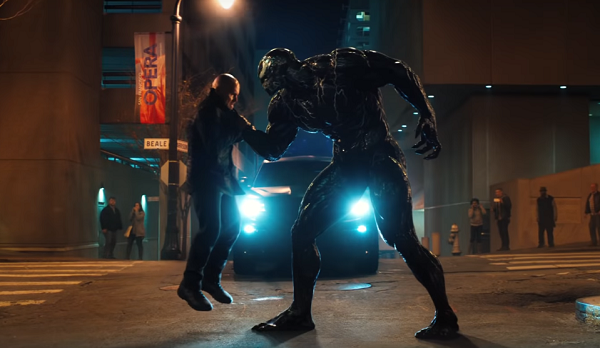 Sony Pictures has officially dropped the second full length Venom trailer that gives us a full helping of symbiote goodness to gawk at. The biggest reveal of course is the full body look at Venom, with his classic white spider glaringly absent. In its stead, are white veins that spread through Venom’s chest and shoulders that aim to provide the same contrast as the classic look.

The trailer also provides the first look at the vicious symbiote Riot, aka Riz Ahmed’s Dr. Carlton Drake of the Life Foundation. An unnamed EMT is given some screen time with a symbiote of her own, but her character or comic counter-part has not been confirmed by Sony. This trailer does give credence to the rumor that the film will be basing some elements off of the 1993 Venom story, Lethal Protector. This story saw Eddie Brock move to San Francisco by terms of a truce between him and Spider-Man, only to wind up facing against offspring of his own symbiote, one of which being Riot.

Sony has kept the synopsis for Venom pretty close to the chest, with only providing the briefest of overviews on the film’s plot on its website.

“One of Marvel’s most enigmatic, complex and badass characters comes to the big screen, starring Academy Award® nominated actor Tom Hardy as the lethal protector Venom.”

One of the film’s biggest questions is the mysterious role of Woody Harrelson. It has been heavily rumored for some time that he will be playing Cletus Kasady, better known as Carnage. This has not been confirmed by Sony or the film’s director, Ruben Fleischer, but his role has been kept quiet for seemingly good reason.