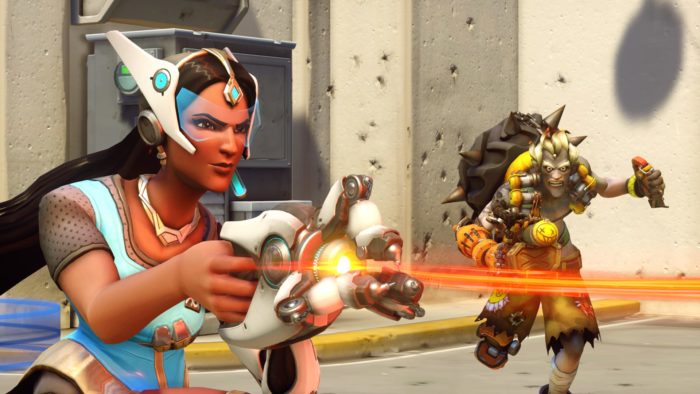 Symmetra has always been one of the more, if not the most, awkward heroes in Overwatch. She’s been through plenty of changes over the past two years and has even come to the point where she’s been sorted in a completely different role. Her latest rework in Overwatch arrived last month, and now that she’s finally playable in the Competitive mode, plenty of fans have gotten the time to grasp her new play style and learn her counters. With that in mind, is Symmetra finally a viable hero?

Symmetra was one of the first playable heroes in Overwatch, starting with a completely different kit than what she has now. Back then, she could give allies shields and her Teleporter was an ultimate ability that granted quick access to any point from spawn. Unfortunately, due to hero stacking in Overwatch, Blizzard nerfed her shield skills to the point where it was pretty much useless granting someone 25 shields. She was definitely in a bad spot, having to rely on close-ranged combat with 200 HP and no escape skills.

Eventually, Blizzard decided to gave Symmetra the Photon Barrier, a moving oval-shaped shield, and the Shield Generator that granted everyone 75 Shields over a large radius. The changes did add a bit of variety to her dull kit, and while they were a welcome change for the first few months, players figured that Symmetra was just as easy to counter with a Pharah or Junkrat. In another attempt to set things right, Blizzard has given us a fresh take on this Overwatch hero, completely reworking her kit for a faster, dynamic play style.

Her turrets in Overwatch have always played a key element in her kit, and while they were great for blocking routes and tight hallways, there was always some sort of rushed, panicked feeling when you were trying to get all six of them out on the field before the enemies advanced. With how her new turrets work, Symmetra can simply deploy all of them without having to stray far from her team. This gives her a better chance to position herself before a team fight, and she can even block choke points from a distance.

Flying turrets also mean that Symmetra can throw them onto areas she can’t normally reach or attach them on walls behind enemy lines to catch them off guard. A Pharah flying around the Lijiang Control Center? Throw a turret on the tower to slow her down. Is a Reinhardt moving in with his team? Plop some turrets behind them to distract the healers and other squishies. They’ve become more offensive tools in Overwatch, giving her more flexibility without sacrificing time and positioning.

The biggest change in Symmetra’s kit, however, lies with her Teleporter, which has been swapped to a regular skill, just like Mercy’s Resurrect. This has become a more team-oriented ability in Overwatch, letting her bring allies across the map and to different locations undetected, making Teleporter one of the best flanking tools in the game. Not only can you teleport your teammates, but also other projectiles, including D.Va’s mech, Torbjorn’s turret, and Symmetra’s sentries, which opens up the possibility for some pretty sick team plays in Overwatch. But as far as these team plays go, you won’t get much use out of her Teleporter without proper communication and coordination with your team. A lot of players also don’t seem to realize that the Teleporter is her secret weapon and often ignore it during matches.

With Teleporter remapped as another one of her abilities, the Photon Barrier has been shifted as her new ultimate ability in Overwatch. Instead of throwing out a moving shield, Symmetra creates a whopping 5,000 HP wall that spans across the entire map. It’s a great tool for deflecting ultimates, such as Pharah’s Rocket Barrage, but the Photon Barrier falls flat in terms of mobility. Having a static barrier means your enemies can walk right past it and there’s no other way to protect your team, save for dancing around both sides of her shield.

And even then, other ultimate abilities, such as Dragonstrike and Coalescence, aren’t affected by her barrier. This poses the question of why you would want to rely on a static barrier when you could have an Orisa or Reinhardt who both have dynamic shields on such a short cooldown. The Photon Barrier acts as another roadblock for enemies, but it isn’t really a game-changing ultimate ability outside of extremely niche situations.

As far as her new Photon Projector goes, it no longer locks onto enemies and fires at a straight line at a limited range. It feels more like a budget Zarya beam at best, and it isn’t exactly reliable since you need decent tracking to ramp up the damage. Yes, using it on barriers charges up the beam, but the chances of winning a 1v1 with a full-health Reinhardt, Winston, Orisa, or Brigitte seem pretty slim. In most cases, you’re better off using her Energy Ball to attack enemies since it moves much faster now and explodes on contact.

Symmetra still retains a lot of her original counters in Overwatch, especially characters who fight from a distance. While her Energy Ball isn’t as sluggish, it still falls quite flat against a Soldier 76 or any other hitscan heroes. Not to mention that Symmetra has extremely limited mobility and relies heavily on her Teleporter to get around the map and make her escape. Players have to be crafty when relying on that ability and predict when to plop it down before rushing into battle.

That being said, these Symmetra changes have allowed her to set up some pretty devastating combos with her team, allowing her to move people around the field and launch surprise attacks with the Teleporter. She’s paving the way for more team play and is extremely deadly when used in a coordinated group.

More importantly, Symmetra is also much more viable on Attack and Control Point maps now, especially since her turrets are much more dynamic and flexible. However, with her lackluster ultimate ability and modest damage output, she still feels a bit like a niche pick compared to the other heroes in the Damage category. Although she probably won’t be replacing a Soldier 76 or Hanzo in higher ranks, Symmetra definitely feels like she’s in a better spot in Overwatch.