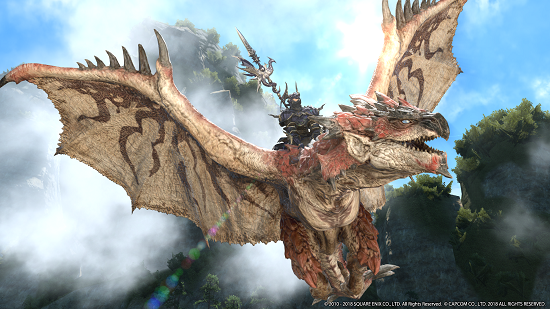 Final Fantasy XV and Monster Hunter World are combining to bring players the best of both fantasy worlds in an upcoming collaboration this August. We’ve already enjoyed a brief glimpse of what it might have to offer, such as the Behemoth in Monster Hunter World, but now we’ve also seen a bit of what monster Final Fantasy XIV players are up against: the mighty Rathalos.

A new clip shows off the battle itself, which will arrive as part of the Patch 4.36 update and The Pagos Expedition. Any player that’s reached level 70 and has completed the main scenario quest “Stormblood” can tackle the Rathalos in Normal and Extreme versions of “The Great Hunt.” The Normal version will allow 8 players to work together to fell the monster, and the Extreme version will let 4 players tackle the fight.

If you play through the collaboration, you’ll get a new Rathalos armor set, minions in the form of Poogie and Palico, a Rathalos mount, and a BBQ spit furnishing.

Both game worlds will benefit from this massive collaboration, and there’s a ton to look forward to, so if you’re interested in seeing the worlds collide, make sure you don’t miss out on the goodies that come along with it. There’s going to be plenty to see and discover, that’s for sure.