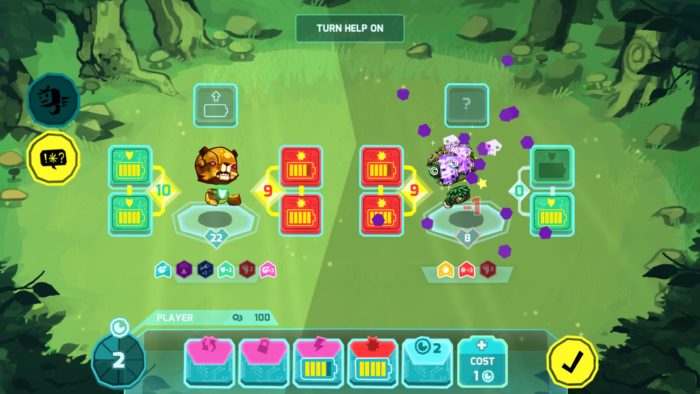 Playniac’s cute and colorful Insane Robots is out now on PlayStation 4, with a staggered release across Xbox One and PC in the next couple of days. It’s a card-based battler that finds you attacking robot after robot with various types of “chips,” as you take on the role of one very confused robot whose memory has been wiped. He’s done something “wrong,” though he has no idea what it was, and is now being punished for it. His punishment consists of having to battle it out with other exiled robots wandering around in arenas for “tournaments” that pit them all against each other. It’s deadly, but it’s also hilarious and cute.

Each fight finds you drawing different chips from your deck that have various purposes. You need to complete your attack and defense circuits before you can act against your opponent, but once you do, the gloves come off. Will you use glitch chips to take out your enemy’s health or supercharge your own attack and defense points? Will you pack a wallop by charging up your offensive circuits or will you keep up a strong defense until you’ve whittled away your opponent’s?

There’s a lot to consider in Insane Robots, and if you’re interested in trying it out on PlayStation 4, you can do so today. The Xbox One and PC versions are coming soon as well.