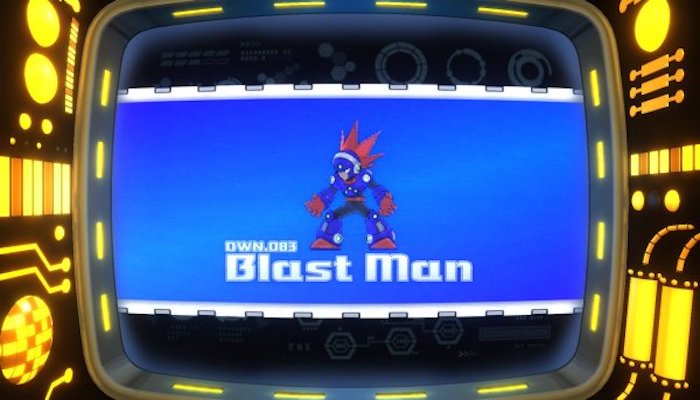 Blast Man is a new Robot Master with a flair for the theatric who also happens to have a love of explosions. Capcom warns players to be wary of lots and lots of explosions. Blast Man’s stage will be set in the ruined remains of a theme park, movie studio hybrid that the robot master has turned into his very own personal playground. Throughout the stage, you’ll see posters of his latest production, “Blast Man Adventure.”

Throughout this stage, enemies will be launch fireballs and release explosive mini-bot drones which Mega Man will have to dodge as he vaults his way over volatile boxes littered throughout the room. One enemy, though, will seem very familiar: Sniper Joe. On top of the challenge presented in this stage, players will also have to stay clear of Sniper Joe’s deadly aim. The mid-boss of Blast Man’s stage is what could best be described as an explosive roller coaster that zips its way through the stage while trying to take Mega Man down.

When its time to fight the robot master himself, players can expect something akin to bomb-tossing bosses of games past. Your reward for defeating Blast Man is “Chain Blast,” a unique weapon that floats bombs across the stage that, upon contact, will stick to enemies and explode after a short period of time.

If Blast Man’s stage feels a little too challenging, players will be able to hone their skills in the new Balloon Attack mode. Here, players will make their way through the game’s many stages except there will be no enemies–in their place, balloons and balloons galore. Bust blue balloons as quickly as possible but avoid red balloons as they’ll add time to your clock, thus ruining your chance of the completing the stage as fast as possible.