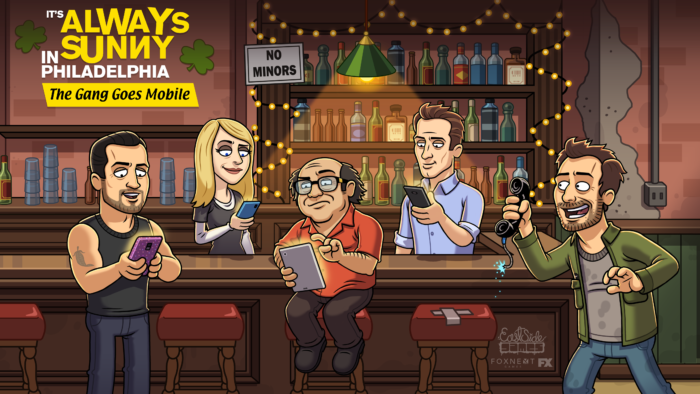 The gang’s up to their shenanigans again, but this time the cast of It’s Always Sunny in Philadelphia is hitting mobile devices.

The new mobile title is coming to Android and iOS devices as it brings your favorite characters from the show together as they hatch several new quick-rich schemes to keep them on top of it all. As you can imagine, most of them will fall apart.

When Frank comes into a ton of dirty money, he asks the rest of the gang to do it for him – yes, now they’re getting into the money-laundering game. Frank asked Charlie to find the “clean” cash in a new, safe place, and as you can imagine he’ll totally screw all that up.

There’s no word on whether or not the game will be a time-management sim or a clicker, as are typically some of the film and TV show adaptations we typically see on mobile, but it sounds like it’s going to feature at least some sort of original story. As far as the actors who bring these characters to life? Hopefully we’ll have some legit voice acting, too.

The game is targeting an official debut later this year, though there’s no official release date in store just yet. If you’re interested in trying it out, you can register to play it first via the game’s website.