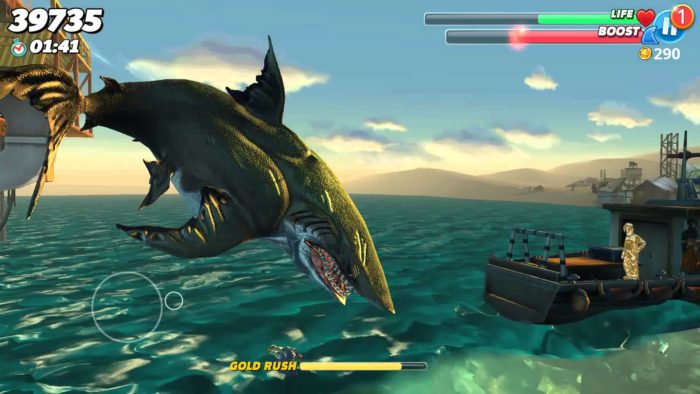 Ubisoft’s quirky shark-based mobile game Hungry Shark World is hitting consoles tomorrow, and players can do their part as a, well, hungry shark on Xbox One, PlayStation 4, and Nintendo Switch starting then chomp up delicious creatures. It’s a perfect addition to the Switch’s library, even though you’ve likely never heard of it (it’s the sixth game in its series).

Hungry Shark World tasks you with playing bite-sized sessions where you try to stay as long as possible by eating various different creatures. The shark will eat anything near its mouth, if it fits within its diet, of course. Much like the classic casual game Feeding Frenzy, you’ll have to meet a specific shark level gobble up the next tasty morsel. Eating a ton of creatures at once will trigger a multiplier, and there are tons of different creatures to eat right up.

There are two currencies to use in-game as well, which one goes to premium items. It’s not clear if these premium item selections will extend to console versions of the game just yet.

Sink your teeth into #HSWConsole, an exclusive deep-sea adventure on PS4, Xbox One, and Nintendo Switch!
Are you Hungry? pic.twitter.com/amzX75EGSw

If the game sounds like something you’d like to see on your consoles, make sure to snatch it out of the sea tomorrow, especially since it’ll be available on the major platforms. And as we all know, any time the Switch welcomes a new game, we’ve got to check it out.