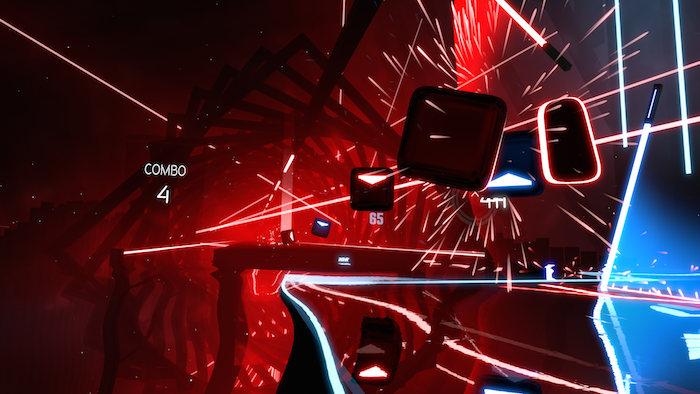 Beat Saber, the smash hit rhythm-based game with Jedi-like lightsabers, was announced for PlayStation VR during Sony’s pre-E3 countdown with a simple trailer, baring no information as to what differences and similarities it will have from its PCVR version. This led many to believe that Beat Saber PSVR will be a straightforward port of the title. This couldn’t be further from the truth as the PSVR version is said to receive a number of exclusive content.

In an interview with GamesBeat, Beat Games CEO Jaroslav Beck said his team has “quite a lot” of PlayStation-exclusive content planned for Beat Saber PSVR. “There will be quite a lot of things we would like to deliver to PS VR exclusively, but it’s a little too soon to talk about it,” said Beck.

Details have been scarce as to what exclusive content PSVR users will receive. Custom tracks is highly likely due to Sony’s vast music catalog, and it’s also worth noting that the song Kumquat heard in the Beat Saber PSVR trailer is unavailable on the PCVR version. However, this is just speculation at best.

Regardless of how light or enticing the exclusive content might be, PCVR version arguably has enough content to keep players engaged with mod support alone, alongside the custom track editor and multiplayer modes soon to be implemented by Beat Games.

Beck also adds that PSVR is capable of delivering “almost 1-to-1 experience as we have on PC right now.” PS4 Pro users will also benefit from higher resolution and better effects compared to the regular and slim PS4 consoles.