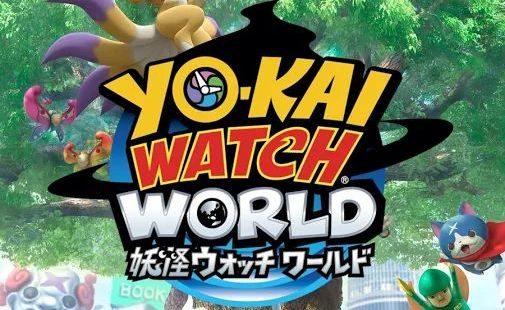 The worldwide phenomenon Pokemon GO may finally have some competition with the launch of Level 5’s and GungHo Online Entertainment’s new Yo-Kai Watch World AR mobile game for iOS and Android devices.

Based off of the wildly successful Yo-Kai Watch series from developer Level 5, Yo-Kai Watch World borrows many of its elements from monster-collector Pokemon GO. After Level 5’s livestream that announced the launch of the game, the Yo-Kai World YouTube account released a CG-filled launch trailer that placed players into a world much like the games where Yo-Kai roam the streets of Japan, causing mischief among residents. Using a smartphone, players can acquire the Yo-Kai’s medals in order to befriend Yo-Kai and take them into battle.

The catching mechanic works exactly how it does in the 3DS games. Players must keep the AR camera on the Yo-Kai until the watch’s gauge is filled, allowing the player to capture the Yo-Kai with treats. The trailer also focusses on Raid battles that put players and their friends against more powerful Yo-Kai. There’s also a huge focus on traveling and allowing Yo-Kai to “possess” other players as they travel to different locations to acquire bonuses and possibly extra experience.

Though it may not have made the biggest impact in the West, Yo-Kai Watch continues be a close competitor to the Pokemon series in Japan, which is not surprising seeing as the games are so similar in concept. The main character, Nate, collects ghosts called Yo-Kai in order to restore balance to his hometown, and with the help of his colorful team, Nate eventually saves the world a few times from evil, powerful Yo-Kai. With several different spin-off games, multiple sequels that take the main characters around the world and its own Pokemon Shuffle-like matching game, it was only a matter of time before Yo-Kai Watch made its way into the AR realm.

Yo-Kai Watch World is available in Japan with no word on a Western release.