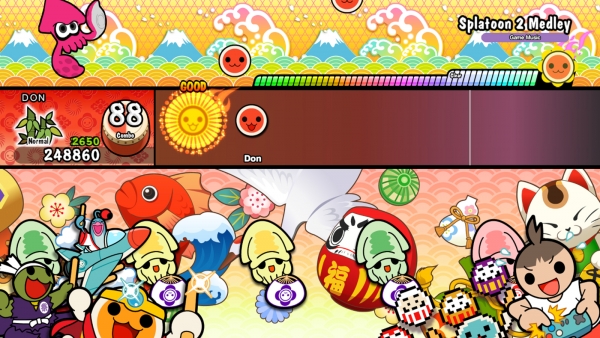 Bandai Namco Entertainment Asia is doing something a little special for English-speaking fans. Taiko Drum Master: Nintendo Switch Version! hasn’t yet been greenlit for a western release, but the company is doing the next best thing. The game will be released with a special English menu in Southeast Asian markets like Thailand, the Philippines, Malaysia, and Singapore.

The game will release on August 9, just a little under a month after the game’s July 19 debut in Japan, so fans will be able to get their hands on it a lot earlier than usual. It comes with Japanese voice-overs as well as Japanese, Chinese, and Korean text, with a special English patch that’s going out for free on August 9 to update players. This is obviously good news for anyone looking to import the game, as it means it’ll be legible for English-speakers, obviously.

The Switch version of the game will come with the new “Shake and Play” function that supports the system’s Joy-Con controllers, compatible with both TV mode and table mode. You could also play it as a handheld if you so desire, but the Joy-Con shaking won’t be available for that. It also includes songs like Super Mario Odyssey’s “Jump Up, Super Star!” as well as the “Kirby Medley” from Kirby’s Return to Dream Land, with a significant Nintendo lilt across its 70 included tracks.

Are you interested in playing the newest addition to the Taiko Drum Master series? It’s been years since we’ve had one in the west, and this might be our best chance at one until an official announcement is made — if we get one, that is.