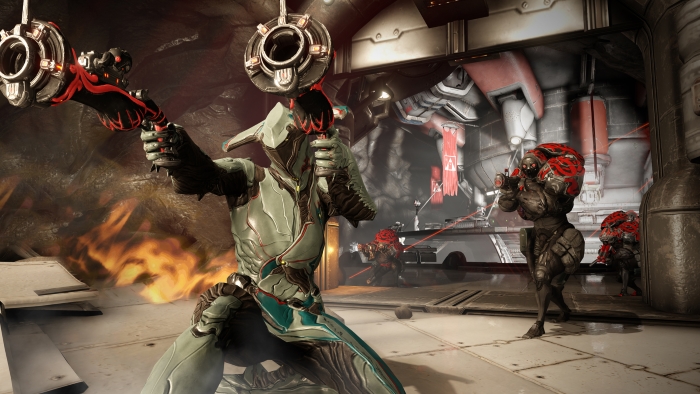 Digital Extremes has released a new trailer focused on the next Warframe story expansion: The Sacrifice.

This expansion follows Cinematic Quests “The Second Dream” and “The War Within,” and focuses on the Tenno’s awakening.

For generations, Tenno have slept with no purpose and no call to wake them. If this trailer demonstrates anything, it’s that maybe it’s time for the Tenno to awaken.

“Wake up,” the trailer urges the Tenno.

But maybe it’s not time to awaken. In the trailer, the narration commands that Tenno “dream, not of what you are,” with a bit of a hanger as it seems that this sentence was unfinished. Instead of what might have been predictable, “but of what you can become,” the trailer ends ominously with another voice saying, “let the beasts do their work.” At the very end of the trailer, before a classic Hans Zimmer-like bwoomp, a third voice, this time that of a male, says, “forgive me.”

What all of this could mean is unknown, but it’s sure to leave fans speculating until the expansion’s release later this month. As the trailer indicates, this June release is only for PC. It would seem that the console release will come at a later date.

The previous expansion, The War Within, was a Cinematic Quest released in Update 19.0 that explored the origin of the Twin Queens, Teshin, the truth behind the Zariman Ten-Zero incident and a series of trials the Tenno had to face. The expansion that occurred before The War Within was The Second Dream. This main quest was added in Update 18.0 and served as a continuation of Stolen Dreams and Natah. It was also the first Cinematic Quest and explored the lore of the Sentients and the Stalker, as well as the origin of the Tenno.

Both of these quests are available now and it is required that you complete them before beginning The Sacrifice.

Currently, there is a free gift players players can receive on the Warframe site that will give them a free Orokin Tea Set Decoration and a 3-day Affinity Booster.

Warframe is a free-to-play MMO game available on PS4, PC and Xbox One.

Update: This story originally stated that it was unknown whether or not The War Within and The Second dream needed to be completed to play The Sacrifice. It is, in fact, known that you must play these two quests before playing The Sacrifice and the story was updated to reflect that. Furthermore, the story originally stated that there is a quest players can complete on the Warframe website to receive a free Orokin Tea Set Decoration. The story was updated to reflect that this is not a quest, but a chance for a “free gift,” as stated on the Warframe site.