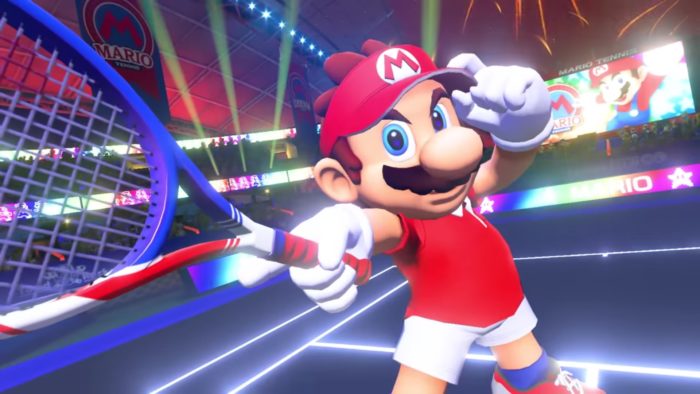 Nothing quite evokes my childish, petty competitive nature like the Mario sports games. Upon Nintendo’s initial announcement that there would be a new Mario Tennis for the Switch, my nostalgia for the delightful Mario Tennis on the Nintendo 64 immediately began to swell. The graphics looked polished and incredibly well-done, and the ensemble of characters brought me back to the days of destroying my cousins with Luigi as a child. Best of all, Waluigi hadn’t been forgotten, unlike a certain upcoming Nintendo title.

As we said in our review of Aces, Mario Tennis Ultra Smash left much to be desired from future titles in the series, and Aces excels at every point. One game-changing addition to Aces’ Standard Mode is the energy meter that allows characters to unleash devastating special shots that are far more difficult to return. While this mode may be preferred by certain players hoping to throw a nostalgia-packed party for their roommates, Aces’ Simple Mode presents a nearly perfect tennis video game with minor tweaks to make the game that much more exciting.

Much like turning off all items and hazards in Super Smash Bros., Simple Mode allows players to test their true grit by getting rid of the energy meter and special moves. Instead, players must depend only on their skill and knowledge of the game and its characters rather than attempting to break their opponents’ rackets to get an automatic win. Which character will be able to take a powerful shot and recover within seconds? Who can counter Boo’s broken curve ball and teleportation? These are the questions in the back of players’ minds as they scope out their competition in Aces’ online tournament mode.

Aces’ online mode is another brilliant addition to the series. Players are simulated into a tournament-style chart and move on to another simulated player as they defeat an enemy. Possibly the best part of facing opponents online is the fact that no matter how good you think you are at the game, there will always be someone who has discovered an entirely new way to play a certain character. Whether its utilizing Bowser’s devastating flat hit to force the ball through opponents’ defenses, or hitting a tight corner shot with the very technical Peach, Simple Mode allows that, “I didn’t know they could do that” moment because of its dependence on the character and players’ ability to fully master those abilities.

After playing through a bit of the game’s adventure mode and going up against the CPU for a few hours, I decided to take my chances and try battling online players. After a few uneventful matches of easy wins, I finally found my match in the form of the speedy Yoshi. Playing as the all-rounder Luigi, the green dinosaur seemed to be the perfect match as we rallied for a solid five minutes, constantly tying up the score and slowly gaining the advantage on one another only to quickly lose yet another point. At this point, I’d realized that I needed to spend more time understanding the finer mechanics of the different types of characters and what they’re good at.

Much like an item-less match in Smash, Simple Mode requires players to be able to execute split-second reactions rather than depending on Standard Mode’s slow-down mechanic in order to get across the screen for the save. It’s in this mode that each character’s strengths and weaknesses fully burst through every recovery, every lunge for a close save and every shard pivot. Differences such as Boo’s ability to curve a shot inhumanly or Chain Chomp’s monster reach from one side of the court to the other become apparent and vital tools that must be mastered in order to understand how to fully utilize and counter them. Even the more subtle, personal differences, like Rosalina’s slower floating speed, begin to shine and help in predicting the outcome of a match when she’s facing a great all-round character like Daisy.

In the end though, Aces’ Simple Mode is easy to learn and comprised of colorful, iconic characters. There were no complicated maneuvers beyond lobs and slices that my roommate, whom had put down the controller long ago, had to memorize. He didn’t need to know the history of the characters, or even what they specialized in. Upon picking up the tiny controller, he’d gotten the basics down in minutes and was beating me by our third match. Mario Tennis suddenly becomes a game that requires a lot of thought, as much as it is an enjoyable experience, in Simple Mode.

This isn’t to say that Standard Mode comes with absolutely no strategy or is in any way inferior. On the contrary, Standard Mode may even be more fun and seems to have a completely different atmosphere surrounding its core players, so it’s a good thing Nintendo included two separate rankings for Simple and Standard Modes. While Simple Mode may focus of the more basic, refined mechanics of the game, Standard Mode introduces the strategies of knowing when to use or preserve your energy gauge while using every spare second to build that gauge.

While the many strategies, devastating upsets and incredibly close victories obviously aren’t exclusive to those who prefer Simple Mode, a game-winning lob over my opponent’s head definitely feels so much sweeter than quick KO. I’ll save Standard Mode for dorm parties, but for now, I’ll take my simple, singles matches with the court music off just for that extra bit of tension.