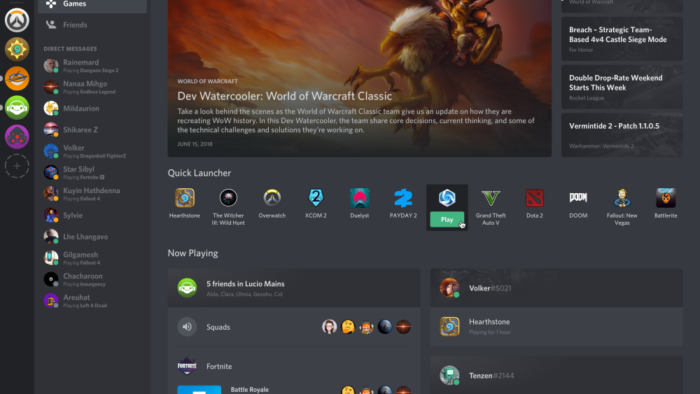 Today, Discord announced its new Games tab, which introduces several new features to its social chat client. As explained in the Discord Help Center, “The Games tab is your new home. It’s warm, cozy, and has all your Discord happenings in one place.” It’s all that and more, actually. It features gaming news, the ability to launch the most recent titles that you’ve played, and various things that your friends are doing or have done in the past, like which games they’ve been digging, Spotify Listening Groups they’re in, Twitch streams they’ve enjoyed, and what they’ve been up to on Xbox Live.

The Quick Launcher allows you to rapidly launch recent games you’ve played directly from the client. While it does not appear to be an option yet, some fans are hoping for a way to customize the Quick Launcher to play the games they want, rather than whatever they’ve recently played.

The Now Playing portion of the Games tab lets you see what your friends are currently playing. If your Discord friends list isn’t very large or there aren’t that many users playing games, the system adds people who you’ve recently voice-chatted with, as well as those with mutual servers. If there’s any user you specifically do (or do not) want to appear in the Now Playing tab, you have the option to remove them by right clicking on them, and checking or unchecking the “Show on Games Tab” box. If a game supports the Rich Presence feature on Discord, you can also opt to join any game a friend is in right from the Games tab. Other features the ability to join and check out Twitch streams, Spotify listening groups, and Xbox statuses.

One of the most interesting parts of this new tool is the What’s New tab. On top of the scrolling portion at the top of the screen, which shows off some news for popular games, news about games that you or your friends have played appears below the Now Playing section under the What’s New header. This section also includes games that your friends have recently played.

This comes about a week after Steam announced an upcoming update to their chat client, which users believed made it appear much more like Discord. It’s rife with plenty of new features, so it’s absolutely worth checking out.