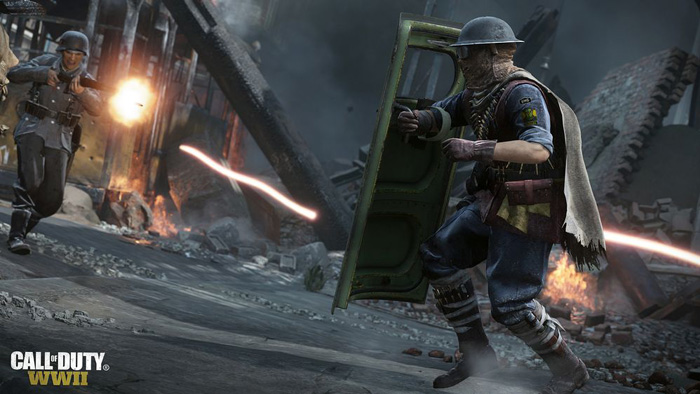 After revealing the third Call of Duty: WWII DLC titled United Front earlier this week, Sledgehammer Games is continuing to build excitement for their next major content release. At present, Call of Duty: WWII only has five soldier classes or Divisions for its multiplayer mode since the game launched back in Nov. 2017. Just recently, the Sledgehammer Games has left telling clues that a new class could be added next week.

Over on the Sledgehammer Games blog, the developers released an image showing a soldier wielding a riot shield. Upon closer inspection, you’ll see that the soldier is wearing a never-before-seen shoulder patch with a text that states “Cavalry.” Additionally, Sledgehammer Games left this text in their weekly community update: “Call in the Cavalry.” As if this wasn’t enough evidence, the text for a “Cavalry” Division was also unearthed back during the beta testing phases of Call of Duty: WWII.

So, what is the Cavalry? While nothing has been confirmed so far, this is largely speculated to be a new Division class. It is also yet to be determined whether the riot shield is a universal item or will be tied to the new class.

New content alongside the third Call of Duty: WWII DLC United Front will launch for PS4 players on June 26.