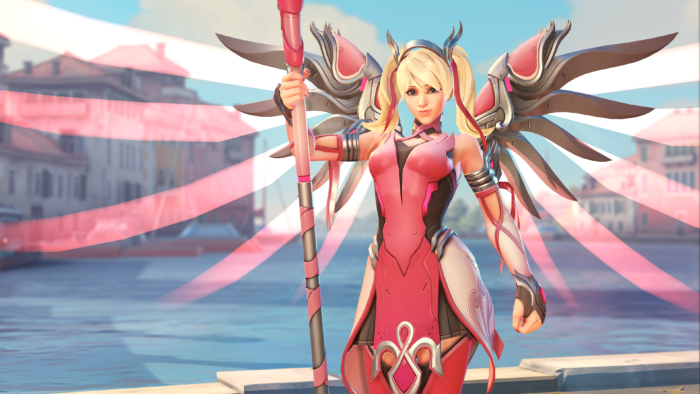 Blizzard Entertainment and Overwatch are working with the Breast Cancer Research Foundation to bring a very special set of Mercy-centric cosmetics, including a limited-time Pink Mercy skin as well as a real-world T-shirt, with proceeds that will go toward the charity in a bid to increase awareness for breast cancer. Who better than Dr. Angela Ziegler to represent BCRF working toward finding a cure?

The new Pink Mercy skin will be sold in-game, with 100% of the proceeds going to BCRF, with a guaranteed minimum donation of $250,000. When the campaign ends on May 21, the total donation amount will be shared with everyone via Blizzard. It’ll be up for grabs for everyone for a short time on PlayStation 4, PC, and Xbox One.

There’s also a new limited-edition Pink Mercy charity T-shirt in both men and women’s sizes designed by community artist VICKISIGH that you can purchase via the Blizzard Store. If you’re not interested in spending real-world cash, you can still help support the cause by logging into Overwatch anytime between today, May 8, and May 21 and receiving a free BCRF-themed player icon. You can also earn a series of special themed witch Drops, including a new player icon and four new sprays only available by viewing special Twitch streams over the next two weeks. You can see a list of streams eligible to view for the charity events here.

Support finding a cure for breast cancer with all this awesome new Mercy merch, and you’ll be the coolest Overwatch fan around. Just leave some of those T-shirts for the rest of us, eh?