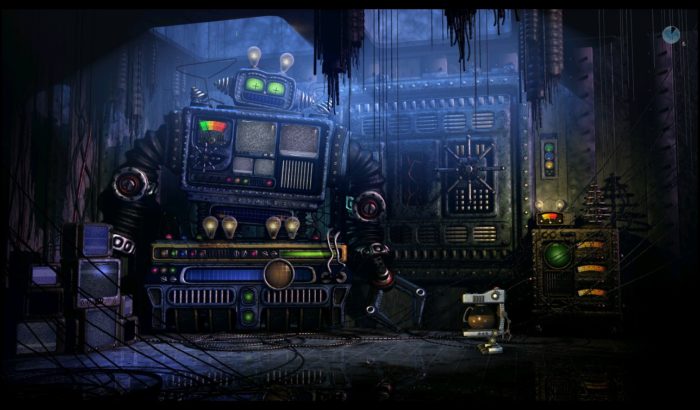 Before Scott Cawthon created Five Nights at Freddy’s and became synonymous with the horror genre, he developed quite a few trippy titles. One of those games, The Desolate Hope, is currently free on Steam.

The Desolate Hope is nothing if not unique. It blends definitively disparate art styles and game genres. Many of the game’s assets are cute at first glance, but upon further inspection they’re held together with wires, cables, and other little bits and bobs that create Giger-esque monstrosities that would be at home in I Have No Mouth and I Must Scream. Granted, the player takes control of a cute robotic coffee machine, but he or she goes up against (and occasionally controls) robotic behemoths that have more details and moving parts than a Final Fantasy XIII boss.

Much of The Desolate Hope is a platformer where players jump through hazardous levels, shoot dangerous enemies, and collect money for upgrades. However, boss battles are a stark departure from the rest of the game and utilize JRPG battle mechanics that should be familiar to anyone who played FNaF World. Plus, these battles are filled with enough flashing lights and effects to send sensitive gamers in to epileptic seizures.

The Desolate Hope, as one might expect from Cawthon, was well-received by both gamers and critics. Many praise the art-style, the successful mixing of genres, and what is apparently a gripping story — longtime followers of Cawthon’s work know how he was able to hide a story full of intrigue, betrayal, and misdirection in the FNaF franchise. The Desolate Hope is nothing if not imaginative in its art and story direction.

We do not know how long The Desolate Hope will remain for free on Steam, but given its almost universal praise, gamers might want to pick it up while they can.