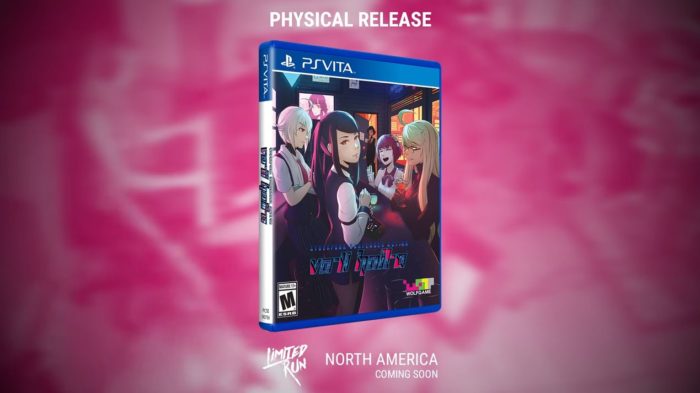 In a post shared by the game’s publisher Wolfgame on Twitter, the cartridge for the Vita version of VA-11 Hall-A has passed certification, and they are currently in the process of finalizing the design for the collector’s edition box art. Past tweets by Limited Run have also confirmed that the game will be compatible with PlayStation TV, as all of Wolfgame’s other Vita releases have been, and that VA-11 Hall-A is receiving the largest run of any Vita game that they’ve ever had. This means there’s not as big of a rush as there usually is to buy a Limited Run release.

In case you missed it, VA-11 Hall-A is a game set in a dystopian cyberpunk setting know as Glitch City, where constant nano-tech surveillance and the constantly rising prices of even basic commodities have led to a grim future lacking in hope. Many people can only find comfort at the bottom of a glass, and that’s where you come in, taking on the role of a young bartender named Jill, who works in the small dive bar dubbed VA-11 Hall-A. Your job is to try and serve the many customers that come in for an escape from reality as best you can.

It’s a visual novel with a strong story focus, and lets the gameplay take a backseat to the events that unfold over time, but still giving the player agency in how the plot progresses. Certain plot elements and points in the story can change depending on how well you mix the drinks, how happy you keep Jill in her home life, and whole plotlines can be uncovered depending on how drunk you get certain characters. VA-11 Hall-A builds up its world through conversations with the many customers you encounter, and it’s up to them to create and piece together the story they want.

No release date has yet been given on the Limited Run release of VA-11 Hall-A, though more information is promised to be on the way soon.