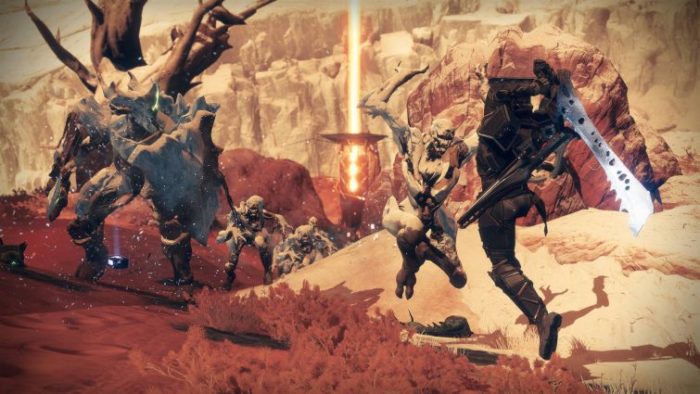 Destiny 2: Warmind, is right around the corner. Escalation Protocol is a new end game activity part of said expansion and Ben Wommack, design lead on the new activity, recently shared some more details on it in an interview with PlayStation Blog.

This end game activity is a horde mode style public event where guardians fight waves of Hive enemies which increasingly get tougher. In Season 3, there will be five unique bosses that rotate every week and each boss is attached to unique rewards.

Wommack claimed to learn a lot from the previous expansion, Curse of Osiris. The Mercury map was quite small which made progressing with few tokens and activities quite difficult. The new Hellas Basin patrol area on Mars has two zones, each zone has its own Escalation Protocol activity. Similar to before, a maximum of three players are allowed to be in a fireteam for patrol.

Escalation Protocol is meant to stand beside the Nightfall, Trials, and the Raid since it is also an end game activity. Players of all levels are welcome to participate in Escalation Protocol just like with any public event, but it will be significantly tougher for low-level players. Their participation will still matter and they will end up getting some rewards from it. However, if a 3-person fireteam is playing without the help of others, it will require guardians to have high-level gear, proper tactics, and a lot of skill. This activity was created to be challenging for all players.

Players will receive armor rewards in a specific order, one armor piece a week, until the entire set is collected. Once players have the whole set, a random gear piece will drop as an upgrade. Also, weapons and vanity rewards will be farmable. Wommack hinted at a legendary sniper rifle with a new perk which he says is “super fun to use!”

Escalation Protocol is a mix of Court of Oryx and Archon’s Forge where players can play for hours and gather a high amount of loot. However, in those events, players figured out the optimal set up of those activities which neutered the challenge. Escalation Protocol will hopefully remain something interesting and challenging over time.

A maximum of nine players can participate in Escalation Protocol. All enemies are at or near the level cap right as the game launches so players will be under-leveled. In this case, nine players may be required in the beginning for most people.

Destiny 2: Warmind releases on May 8.