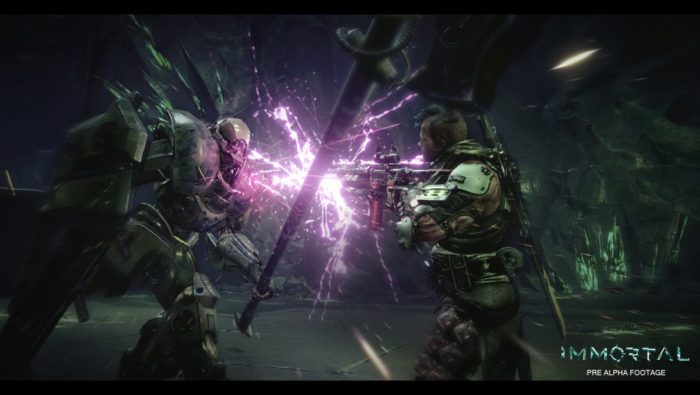 Sold Out and Toadman Interactive announced today that Immortal: Unchained will launch worldwide on PS4, Xbox One and PC on Sept. 7.

Described by Sold Out and Toadman Interactive as a “hardcore, action-RPG shooter,” Immortal: Unchained will see players unleashed from an eternal prison and tasked with saving the Cosmos from a universe-ending event. Because you’re the ultimate weapon, your character will annihilate legendary bosses and engage in brutal and tactical combat. In between fights, you’ll explore dark, sci-fi worlds interconnected with one another as you search for truth and salvation. Immortal: Unchained warns that you should expect no mercy.

“With its focus on brutal, ranged combat, we hope that Immortal: Unchained will stand out among this emerging, unforgiving genre and prove a challenge to even the most hardened players,” Sold Out Marketing Director, Sarah Hoeksma, said.

Sold Out and Toadman Interactive released an announcement trailer for the game last August, which you can view below:

Sold Out is the publisher responsible for bringing players titles The Escapists 2 and Overcooked! Special Edition. They’re also the team bringing you the upcoming park management simulator, Jurassic Park: Evolution, in a partnership with Frontier Development. This partnership brought Elite Dangerous to players as well.

The developer behind Immortal: Unchained is Toadman Interactive, and they’re best known for Warhammer: Vermintide and the whereabouts-unknown Dead Island 2. They were founded in 2013 with a team whose members previously spanned all across the video game industry. Some of them worked on Fable, some Battlefield and others, Just Cause. Regardless of where their members might have come from, the studio is committed to bringing high quality RPG games to PC and Consoles, according to their website.

There is currently nothing more to announce at the time, but for those interested, Sold Out and Toadman Interactive recommend following Immortal: Unchained on Twitter and Facebook for the latest updates on the game’s development.