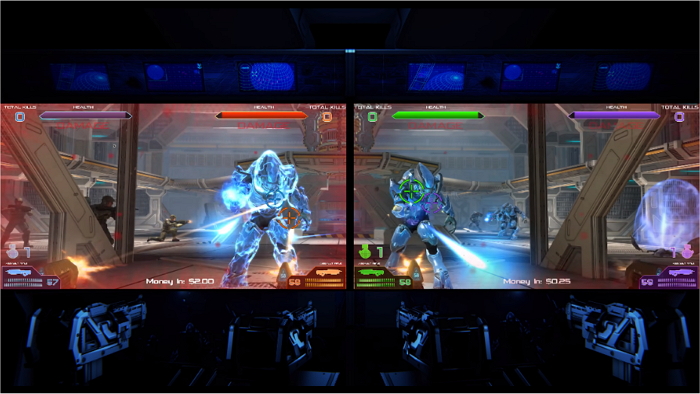 The new entry in the series is a four-player arcade machine designed and built by Raw Thrills and Play Mechanix “in close collaboration” with 343 Industries. The two companies have worked together to build arcade machines for other franchises, such as The Walking Dead and Terminator Salvation.

According to the game’s description, “Set in the timeframe of Halo: Combat Evolved, this new arcade experience hot-drops players feet first into the boots of Fireteam Raven – a group of elite Orbital Drop Shock Troopers (ODST) on the surface of Alpha Halo fighting alongside the Master Chief and the rest of the UNSC as they try desperately to prevent the alien Covenant alliance from taking control of the ancient superweapon.” Check out some gameplay in the reveal trailer below.

The Halo: Fireteam Raven machine will feature a 130-inch monitor capable of 4K visuals with “four turret-mounted, multipurpose machine guns.” The gameplay pits the four players against classic Halo enemies, such as the Covenant and Flood infestation, while fighting in vehicles and spacecraft too. Players can also scan a QRC code to upload high scores to the Halo Waypoint online portal and compare with friends.

Halo: Fireteam Raven will be launching at Dave & Busters restaurants in North America and Canada this summer with more locations yet to be announced.