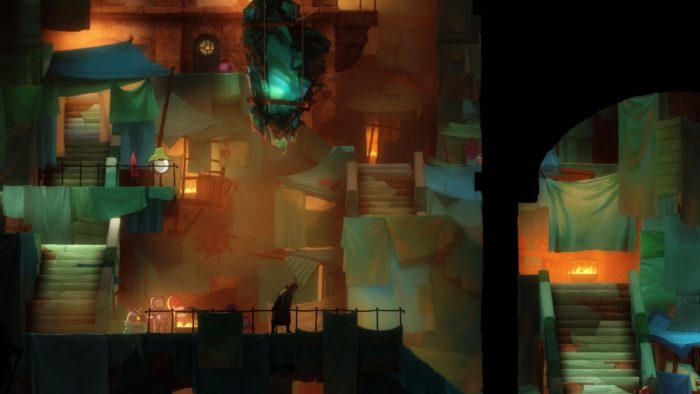 Under the Square Enix Collective banner, some wonderful games have released over the past year or so, many of which are platforming-focused. Black The Fall is an ingenious, puzzle-centric experience framed around the Romanian developers’ experiences with Communist oppression and Octahedron is a vibrant, fast-paced vertical platformer with a pulsating soundtrack. Now, the next game to be given the limelight is Throughline Games’ Forgotton Anne, an cinematic adventure game set in a world where everyone’s forgotten items go to live their own lives, and it continues the Collective’s streak of quality releases.

You play as the titular Anne, Enforcer and one of just two humans in The Forgotton Lands. The other inhabitants are all the everyday items we discard without a second thought. That old pair of boots, lost sock, or bookcase that’s gathering dust in the basement, leave our world and start anew, getting their own personalities. They’re called ‘Forgotlings’ and they’re central to the game’s story. Master Bonku, the second human living in The Forgotton Lands, is creating an Ether Bridge that’ll take himself, or some of the world’s other inhabitants, back to the human world, but there’s a rebel uprising beginning that distracts Anne and Bonku. Anne’s role in the world is to keep the peace, ensuring that each and every Forgotling is behaving as they should. Using the power of ‘Arca’, which plays an important role in the gameplay and is the resource that powers the whole world, she can distill them to their lifeless form, making her a respected and feared figure throughout the realm. With that power in hand, you set off to catch the rebels who have begun to attack Master Bonku’s Tower grounds.

Along your journey to catch the rebels, you come across a variety of puzzles and obstacles. Forgotton Anne is a platformer, so there’s jumps to make and puzzles to solve that involve the flicking of switches, the moving of platforms, the opening of gates, and the altering of Arca currents. They’re mostly simple, requiring little more than some forethought and quick movements – nothing too tricky. Those that involve the altering of Arca currents are the most engaging since they require you to turn dials in the correct order to start or interrupt a piece of machinery. They’re not overused either, with just a few featuring in each area.

Forgotton Anne’s jumping mechanic can be frustrating, however. Anne’s leaps often feel imprecise, especially when using her Arca-powered wings, with it seeming like she can only jump at a few different angles. She’ll often jump too far or too low for a platform, or straight up when you wanted her to jump at 45 degrees to her right. It can lead to some frustrating moments, especially during the few platforming heavy sections that are spread throughout the game. Anne can’t die from falling, but you’ll be climbing the same sections a few times after she misses a jump or two. There’s also some Arca-based puzzles that can see Anne without her power at an important moment, and if you fail a puzzle a couple of times or forget to re-fill, there seems to be no option but to restart the game and return to the last save. It’s by no means a regular issue, but it certainly detracts from the enjoyment of a few puzzles.

The gameplay isn’t Forgotton Anne’s focus, however, nor is it its strength. It is, first and foremost, a cinematic adventure game with a whimsical, fairy-tale style story that’s set in a beautiful, anime-inspired world. Anne isn’t the threatening character that her Enforcer role implies. She’s a sweet young girl who’s driven by her dreams and is determined to do what she knows as the right thing. She develops as a person as the six to seven hour story plays out, learning from the other unique characters that inhabit the world. The sheer number of them that play a part, and the wonderful characterization work, give a real community feel to the world. There’s a pistol who’s the city’s Chief Inspector, a refrigerator who serves drinks at a secret bar, and a cushion who’s tasked with cleaning The Tower’s walls one brick at a time, to name just a few. There’s others that play an integral role in the story too, each of which have their own unique voices and personalities. They can be quiet cliched characters, similar to those you’d see in classic Disney animations, but they fit well in Forgotton Anne’s mystical world.

There’s some off-putting dialogue in the interactions with minor characters, however. The performances are good for the most part, and the writing is a level of basic that actually fits with the tone, but it suffers at times. Some sentences feel oddly written, with certain words sounding like the wrong choice. Two halves of sentences can feel disjointed, as if they were recorded at separate times or as if they were rushed due to how much dialogue there is and how most of the voice actors play multiple characters.

The overarching story is also great. What’s initially presented as a typical tale of a hero’s adventure in a magical world evolves into one that’s deeper and explores some darker themes, especially in its latter half, but without losing the charm of the fairy-tale tropes. There’s real emotion in Anne’s journey, in both a personal and wider way, and the pace at which you progress makes it feel like the story is something that involves a whole world, rather than just the few characters you spend a significant time with.

What makes it more compelling is the choices you can make that significantly effect how the story plays out and how Anne’s is seen by the Forgotlings. From the first scene, when a seemingly innocent red scarf breaks into Anne’s room, there’s a couple of things you can do. You’re not presented with a choice, per se, but a message appears once you’re done so saying, “the outcome could have been different,” adding weight to simple actions. These moments crop up throughout the story, giving you the chance to mould Anne slightly into the person you want to see her be, making her a really engaging character, even in a short period of time.

Forgotton Anne’s world itself is also a magical place. The animation is stunning – the hand drawn visuals clearly being anime-inspired. The game’s animators have spoken about their influences and there’s obvious similarities between Studio Ghibli and Throughline’s game. It’s impeccably detailed, but it’s the lighting and use of color that stand out. Whether it be the orange of smouldering fires and glowing emerald greens of underground passages, or the deep purples and blues of the rain soaked city, the lighting plays a huge part in conveying the tone in each location and highlighting the level of detail. The cinematic presentation and level design only acts to accentuate the art. There’s a few anime-style cutscenes, but most of the cinematics involve the camera panning in and out to show off a certain amount of the world. It moves in tightly to Anne as she explores puzzle rooms and tight passageways, but will zoom out as she runs through an abandoned train station, showing off more of the city on the horizon.

The beautiful soundtrack, created in collaboration with the Copenhagen Philharmonic Orchestra, also fades in and out with the camera to emphasize the perspective change. The camera changes are also so seamless, with no loading between conversations, rooms, or locations, keeping the story moving. There’s literal depth to many of the levels, with Anne being able to explore multiple horizontal pathways in one location, with secrets being hidden everywhere. The layered levels are often more open that they may seem, not only adding to the complexity of some puzzles, but introducing you to new characters that add to Anne’s backstory and paint a more detailed picture of Forgotton Anne’s world.

Its puzzles and platforming may not be anything to shout about, but they aren’t Forgotton Anne’s focus. The way it develops a detailed world, full of unique and interesting characters, while keeping the central story compelling and surprising, is remarkable, especially in such a short period of time. Anne is a strong, emotional character and her adventure is one worth experiencing, even if you want to do nothing more than marvel at the stunning animation.