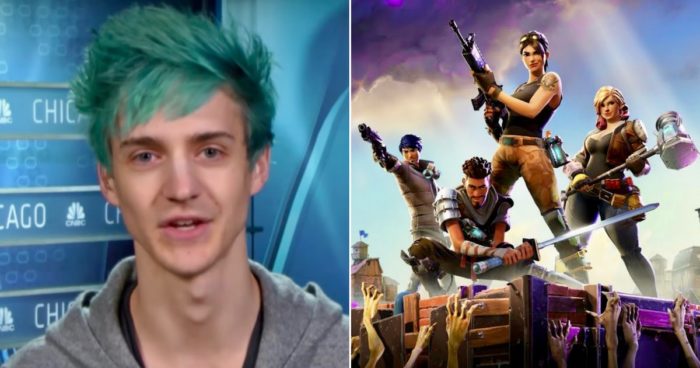 When Ninja first streamed with rap superstar Drake, the internet went into meltdown. After reaching a record-breaking 628,000 concurrent viewers on Twitch (almost doubling the previous record of 388,000 viewers), it wasn’t too hard to imagine the pair would buddy up for some duos action once again.

Thankfully, we didn’t have to wait long to see it again, and this time, Drake decided to up the stakes completely out of the blue. Just as they reached the end of their second Duos game, Drake stated that he’d donate $5,000 to Ninja’s stream. Using a combo of the Easter-themed Egg Launcher and the Scoped Rifle, he does the damage and comes out on top.

Fortnite is constantly throwing new toys to play with on the battlefield, with one of the latest updates adding in a particularly cool new defensive item called the Port-A-Fort. This grenade erects a small fort where it lands, used quickly to either save yourself from an intense firefight or give yourself a tactical advantage against your opponents. But as the famous phrase goes, the best offense is a good defense, and Ninja takes that saying very literally. Here, he uses the Port-A-Fort to secure himself an offensive kill. Genius!

Even when you’re a pro, not every match goes to plan. There are countless times when Ninja has accidentally fallen to his death or been sniped from a distance, but no pro will ever go down without a fight. Here, he desperately searches for shelter on just a single health point. In typical Ninja style, though, he ends up taking down several enemies despite the disadvantage.

Of Ninja’s 2000+ victory’s on Fortnite, some are spicier than others, and they don’t get much more hot than this. After a particularly impressive game in which he’d racked up eleven kills, he ends this particular game in style with a spinning no-scope kill. Enjoy the spectacle!

There’s nothing more annoying in Fortnite than getting Boogie Bombed. This morally degrading item causes you to stop everything you’re doing and break out your best dance moves, normally resulting in you being wide open for anyone to take a shot at you. Ninja, of course, knows exactly how humiliating this is and will at any chance use it to his advantage. One match, in particular, sees him finish off a game by lobbing it at an unsuspecting player, dabbing and then shotgunning his way to victory. It’s hilarious to watch, but you can’t help feel remorse for the player that just got completely humiliated live on stream to thousands of people.

Seeing Ninja rack up a large kill count is expected when you watch one of his streams. His average KD is 10.8, a huge number for nearly any competitive shooter. But one particular game saw the hit streamer beat his own record and rack up an insane 32 kills! Dropping into Tilted Towers, (where else would you drop if you’re looking to kill 32 people in a single match…) he quickly knocks out 12 people as if they’re pawns in a violent game of chess. From there, he works his way around the map picking players off like flies.

Fortnite’s building mechanics allow for some creative gameplay strategy. Some choose to use their materials to build a giant elaborate base, others may just use it to get somewhere out of reach. What Fortnite does best though is encourage you to think outside the box (or fort if you will), something that’s very clearly on display on here. Ninja gets his partner to fire a rocket just as Ninja jumps, causing him to fly on the top of the rocket like Kong in Dr. Strangelove. Just as he reaches his target he jumps off and gets a double kill with a Tactical Shotgun. It’s a true testament to the creative possibilities on display in Fortnite.

The opening stages of a Fortnite game leave you incredibly vulnerable, with just your pickaxe as an offensive weapon. But Ninja proves that only a poor workman blames his tools. He stalks his prey, building structures every time they get near him. Finally, he finishes them off by jumping over them and raining down pickaxe hits. It’s an embarrassing way to go, but a spectacular win on his behalf.

As you can tell from this list, Ninja is no stranger to humiliating people for his final kill, but there are times when you can’t help but feel sorry for his opponent. One match here saw him reach the final player and entrap him in a tiny box. Dancing around the player, he quickly builds a small box fort around him. He then carves out a window and quickly inserts a trap to the roof. The player, having no idea what’s going on, gets zapped by the trap, thus killing him.

Like a tiger ready to pounce on his prey, Ninja, true to his name, sometimes takes the slow and stealthy approach to matches. This often means hiding in the far away distance and picking off enemy’s one by one with a Sniper Rifle. While he’s pulled off quite a few Sniper tricks, arguably his most impressive is this incredibly long, 278-meter shot.