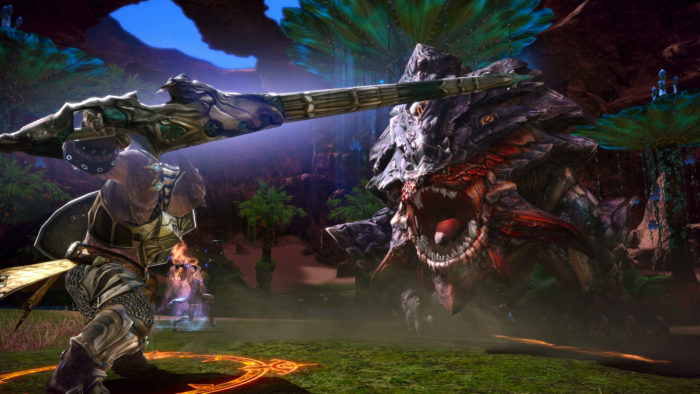 Why a review in progress for TERA? TERA, the long-running action-oriented MMORPG has finally arrived on consoles. While we have been able to get some time in before launch, a lot of what is important to properly evaluating a MMORPG is its end game. The end game is where dedicated players will spend the vast majority of their time. It takes time to reach that point and exhaust all the events available to players. Until we have done that, we will hold off on giving TERA for consoles a score. However, for now, we’ll give interested console players our early impressions from the perspective of a brand new player, which will likely be the case for many of you reading this.

Back when TERA came out in 2011, I was still knee deep in Final Fantasy XI if you can believe it. Hell, I still kind of am, although I flip between that and Final Fantasy XIV fairly often. Despite hearing good things, TERA wasn’t free to play right away and I wasn’t interested in paying for multiple MMORPGs at that time so I moved on.

Here I am now though in 2018 with a second chance. TERA is not only free-to-play now, it has also finally arrived on consoles (a natural fit given the gameplay), and given the dearth of true MMORPGs on PlayStation 4 and especially Xbox One, TERA has certainly recaptured my attention, and it should capture yours, too. Although TERA is still chugging along just fine on PC, Warframe has shown that free-to-play games deep with content can have sustained success on consoles and this is an opportunity for a second coming of the game.

Like the editor’s note mentions above, this review in progress is tackling TERA from the perspective of a brand new player going through the early game. I’ve never played TERA, and chances are, you the reader probably haven’t either unless you’re a PC fan curious about how the console versions are coming along.

TERA begins with an extended tutorial/world building series of quests meant to give you a sense of how TERA’s gameplay works. While TERA, like most MMORPGs, is about spamming a rotation of abilities, it’s far more dependent on positioning and careful timing than many other MMORPGs on the market. In Final Fantasy XIV, once I’m engaged and in range, all my attacks will land assuming I have enough accuracy. In TERA, I need to make sure that if I’m thrusting my lance into an enemy, that they haven’t just sidestepped me, or that I’m not slightly off center otherwise, I’m going to miss. It has nothing to do with an accuracy stat, I literally missed because I didn’t properly line up my attack. Coming from a more traditional MMORPG background, this is a very distinct difference.

If you’ve thought MMORPGs were boring mostly because of their combat, TERA, like The Elder Scrolls Online, is a game worth trying. I’m very impressed with how dynamic and satisfying fighting is. While FFXIV’s most difficult encounters have you on the edge of your seat, anything that’s not challenging is a snooze fest. I chose to play as a Lancer (tank class), and even fighting low-level enemies requires me to properly block, attack, and unleash powerful counter attacks that stem from me blocking attacks with my shield. I’m not used to having to actively think about shield blocks because, in FFXIV and FFXI, they just happen automatically. In TERA, I’m an active participant in combat. While it’s still early on, I would wager that this strength will be enhanced even further once I start taking on the game’s more difficult enemies, the BAMs (bad ass monsters).

And, in case it wasn’t obvious based on the above, TERA is very well designed for consoles. Playing on a controller is natural and easy to adjust to. If you’ve played TESO or FFXIV on a controller, you’ll feel right at home with TERA. The only real technical problem I’ve ran into is that the frame rate will skip sometimes when in a crowded area, like a city.

TERA isn’t the greatest, at least early on, at explaining the basics to new players, though. Hours in, I still haven’t really learned what to do with most of the stuff I’m picking up other than just equipping the best possible armor and weapons. I haven’t seen a need to group up, nor do I really know how even if I wanted to. The only thing I’ve played with others so far is the bizarre Kumas Royale Battleground PvP game mode. I’m technically “purchasing” skills as I level up, but so far I’ve had enough for every skill that I’ve earned as I got them. So that economy of sorts is a bit confusing. I can, and have, just looked some of this stuff up, but still, it’s worth noting that yeah, if you’re diving in for the first time, prepare to be a little lost at first about anything that’s not related to following the quest markers and killing what you need to kill.

Speaking of which, your progress as you’re leveling up is mostly tied to completing the game’s main story, as many MMORPGs are. The story is still building up, but it got off to a very intriguing start in the game’s tutorial zone on Stepstone Isle.

Everything seems great on this secluded island despite things kind of being crappy outside of it. However, an attack on this isle forces a young gifted girl, that you grow quite fond of during this opening act, to sacrifice herself to save the all-important Sorrow Tree. It’s also strongly implied that a traitor is what led to the attack. The fate of this girl, and who the traitor is, was left up in the air as I was sent away and asked to feign ignorance to protect that investigation. I’m interested in seeing where this leads and was a solid start to the story.

After that blazing beginning though, the pace of the story slows severely. There are A LOT of filler quests that are not as interesting as this opening story arc. It’s all: go here, kill that/talk to that person/gather X material and come back kind of quests for the most part from what I’m seeing. This is par for the course for MMORPGs, so it’s not a necessarily a criticism as just a fact of MMORPG life, but TERA hasn’t yet elevated itself to the level of The Elder Scrolls Online or FFXIV (Heavensward and onwards), when it comes to utilizing lore and interesting dialogue/story developments to mask otherwise mundane fetch quests. It starts to feel quite excessive after a while.

So in sum, we’re still working our way to the end game and we’ll give a final verdict after spending some time with that. However, in the meantime, TERA is a low-risk game to try out. Yeah, the questing isn’t anything to write home about it seems, but it’s still a fast-paced, free-to-play MMORPG, that is genuinely fun to play thanks to its dynamic combat. How rewarding it is in the long term, and whether or not it’s worth it compared to other options on consoles is something we’ll evaluate later on.