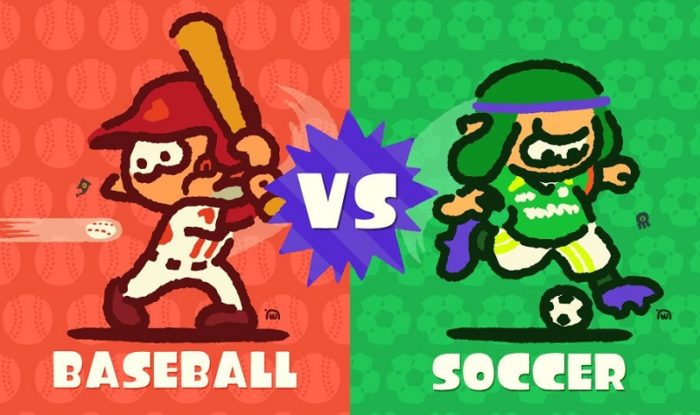 Nintendo Versus announced that starting on April 6, 9 p.m. Pacific Time, a new Splatoon 2 Splatfest will be taking place. This time, the theme is Baseball vs. Soccer.

In Splatoon 2, Splatfests are competitive events which are held from time to time. When the event starts off, the two main characters, Pearl and Marina, will take opposing sides of a debate. Past debates have included topics such as “Cake vs Ice Cream” and “Which came first? The chicken or the egg?” Players choose their team based on their personal opinion. At the end of the Splatfest period, the team that has earned the most points in during competitive play will be deemed the winner, thus settling the debate once and for all. This time around, Marina will be rooting for Team Soccer, while Pearl’s team will be Team Baseball.

Splatoon battles involve two teams of four players facing off against each other. Unlike most shooters, earning the most kills won’t necessarily net you a victory. Instead, the goal is for each team to try and cover the area with as much of their ink color as possible. After the Splatfest ends, players will get some Super Sea Snails, based on their performance and the performance of their chosen team. These snails can be used to upgrade equipment in the game.

To see past Splatfest winners and statistics, you can visit Splatoon 2’s official website.

Splatoon 2 was released on the Nintendo Switch on July 21, 2017. It is a sequel to Nintendo’s third person multiplayer shooter, Splatoon, which was released for the Wii U back in May, 2015.