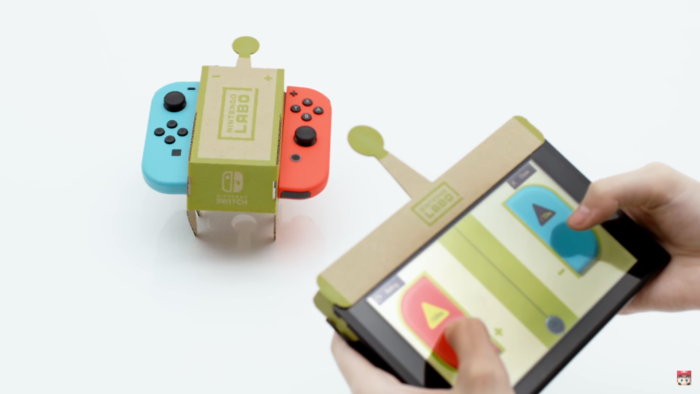 Nintendo Labo director Tsubasa Sakaguchi, producer Kouchi Kawamoto, and hardware lead <r. Ogosawara sat down with Nintendo to talk about the upcoming Nintendo Labs sets, which come out on April 20. During the interview, the team discussed how the Nintendo Switch’s Joy-Cons were absolutely integral to the project so that it could be brought to fruition.

When asked where the team got the idea for Nintendo Labs, Sakaguchi stated that he’s always wanted to “make things that you can interact with.”

“I knew I wanted to make something new, and I knew that there are already a lot of video games out in the world. Honestly, I just tried not to overlap with things that had already been done, ” said Sakaguchi. “We’d been thinking a lot about how to make something easy to grasp, something that could only be done with the Nintendo Switch console and its Joy-Con controllers. I just followed the logic of that question as far as I could, and it turned into Nintendo Labo.”

Sakaguchi explained further that the differences that set Joy-Con controllers apart from others were their sensors, and the team would use the “differential” between said sensors to do new things, which was the tip of the iceberg for the upcoming projects that would comprise Labo’s release. “Differential,” Sakaguchi explained, has much to do with using each controller to perform its own action, such as one controller providing the fishing rod’s handle in a fishing game and the other to the reel.

“As we got deeper into all our experiments we started to think of the Joy-Con as bundles of sensors—that really freed us to consider all kinds of possibilities.”