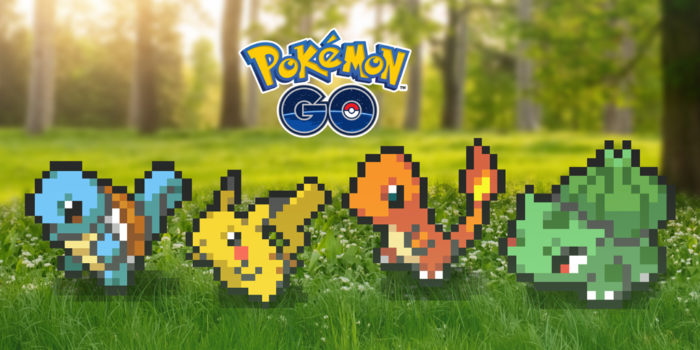 Over the weekend, Niantic implemented some drastic changes to Pokemon GO. There were the new research tasks, for starters, but the big talking point was the 8-bit graphical overhaul to its aesthetic. As part of an April Fool’s gag, Niantic replaced most of the Pokemon models with sprites ripped straight from the Pokemon Bank. Intended as a temporary novelty, the models aren’t sticking around for long. But honestly, they’re a huge a improvement over the 3D models, and should absolutely stay.

Of course, Niantic is no stranger to using assets from existing Pokemon games and placing them in Pokemon GO. All of the game’s Pokemon models are taken from Pokemon X and Y (and Omega Ruby and Alpha Sapphire, Sun and Moon, and Ultra Sun and Ultra Moon), and the models mostly work with Pokemon GO’s AR functionality. Occasionally, players will run into the world’s smallest Wailord floating above a kitchen sink, but that’s beside the point.

The Pokemon Bank sprites were patched into Pokemon GO a day or two before April Fool’s and replaced the 3D models in the menus that list a trainer’s captured Pokemon and help track and identify nearby wild Pokemon. The 3D models are still used for captures, battles, and Pokedex entries, but as of writing this article, the sprites are still used for literally everything else.

I grew up with Pokemon, and I have seen it evolve with technology. I was there when the series made the jump from the 8-bit Gameboy to the 32-bit Gameboy Advance. I witnessed the glorious transition from static battle sprites to moving sprites and finally full 3D models. As much as I love how the series has pushed itself forward, I am always drawn to the simpler pixelated aesthetic of its beginnings, because that’s where I fell in love with the franchise. Odds are if you see an adult playing Pokemon GO on the street, he or she also has a love of nostalgia for the older games, a nostalgia these sprites reawaken.

Not only do these sprites call back to the Pokemon games of old, but they help Pokemon GO feel like a bonafide Pokemon game and less like a mobile game. The Pokemon franchise has always used two different models/sprites for its Pokemon: a detailed one for battles and Pokedex entries, and a simplified one for keeping track of the Pokemon in a team and in storage. It’s essentially a Pokemon tradition, and the inclusion of these simplified sprites makes Pokemon GO feel more like the rest of the series.

However, I cannot discuss features for Pokemon GO without mentioning a common complaint among players: the game eats up electricity like an Electabuzz at a power plant. Mobile devices that run Pokemon GO have to render more models than they are equipped to handle, but the retro sprites could somewhat fix this problem. 2D Sprites are much easier to render and don’t have any of the 3D models’ animations, which makes them far more processor-friendly. Of course, some gamers might prefer the models to sprites, so giving players the option to use sprites as a battery saver option is probably the way to go.

You might wonder why Niantic would ever consider transforming an April Fool’s joke into an in-game feature. Well, recent history is full of April Fool’s pranks that were so well-received they eventually became real. The iPhone started life as a “mobile phone add-on for the iPod” April Fool’s joke, and Toonami returned to television a month after it aired as part of an April Fool’s Day prank because of fan feedback. Most importantly, Pokemon GO began as nothing more than Google’s 2014 April Fool’s joke. If the game started as little more than a joke that garnered several tons worth of popularity, why can’t its features?

I am not alone in this opinion; the fan response to Pokemon GO’s April Fool’s feature on the the game’s Facebook and Twitter pages is overwhelmingly positive. Players want to keep this as a permanent option, and with any luck, Niantic will do just that.